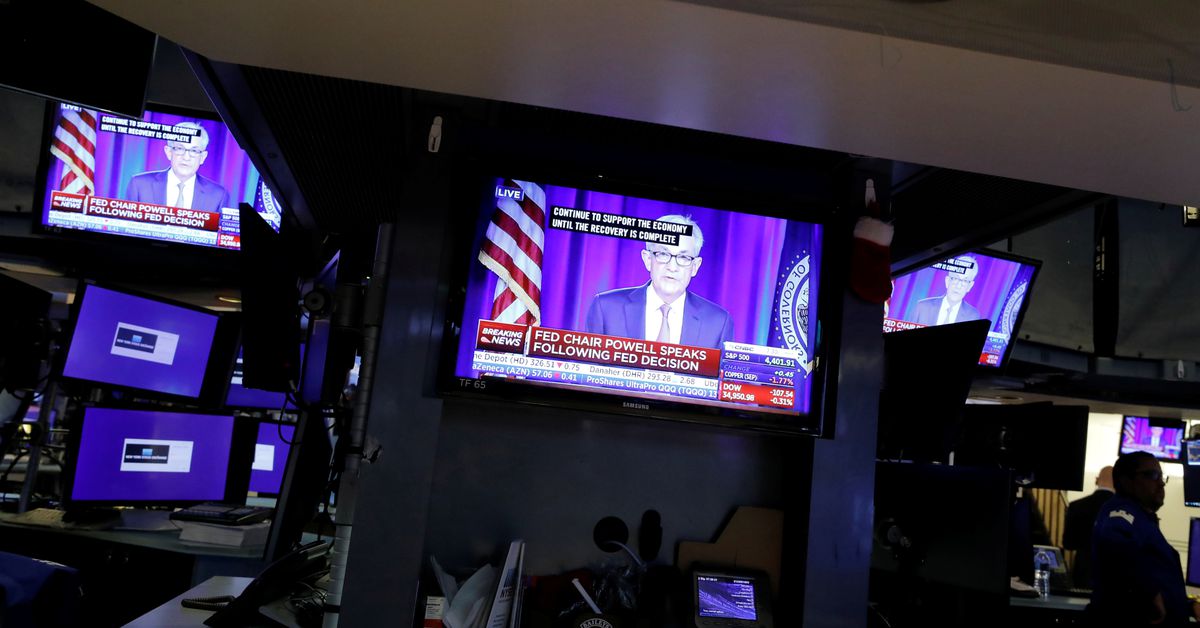 NEW YORK, July 29 (Reuters) – Investors looking for clear guidelines on when the Federal Reserve will begin tapering its massive bond purchases were left waiting Wednesday, with all eyes next on the annual Jackson Hole conference of central bankers in August.

The central bank has been buying $120 billion in fixed income assets per month – $80 billion in Treasuries and $40 billion in mortgage-backed securities – to support the economy as it recovers from the impact of the coronavirus pandemic, and markets have been fixated on when the Fed will start tapering.

Powell said in June that there had been initial discussions about when to pull back.

The Fed, which concluded its two day Federal Open Market Committee policy meeting on Wednesday, appeared to make progress in that discussion, though there was no clear timetable.

“The Fed opened the door to tapering but they didn’t pin themselves into it,” said Scott Kimball, co-head of U.S. Fixed Income at BMO Global Asset Management.

As a result, the market will likely now focus heavily on whether the central bank will give further indications at the Jackson Hole conference on Aug. 26-28 of its policy to allow inflation run hotter than normal to make up for periods of low inflation, said Kimball.

“The Fed owes us an update on their thinking” given the economic recovery in the year since, Kimball said.

Rick Rieder, chief investment officer of global fixed income at investment firm BlackRock, said he sees the Fed beginning to outline tapering at Jackson Hole, but will give more specificity at its September policy-setting meeting.

Powell said he is in the process of writing a speech for the event, but declined to give details.

“The Jackson Hole meeting may be another chance for the Fed to elaborate. Perhaps they would give us details on tapering and what that looks like,” said Jake Remley, senior portfolio Manager at Income Research + Management.

Some analysts such as Brian Rose, senior economist, Americas at UBS Global Wealth Management believes the Fed could announce tapering in December.

The market reaction to the Fed’s policy statement was muted.

Benchmark 10-year yields fell to 1.228%, after briefly rising to a session high of 1.278% immediately after the Fed statement. The yield curve flattened, with the spread between two-year and 10-year notes narrowing to 102 basis points.

“It looks like a nothing burger,” said Joseph Lavorgna, Americas chief economist at Natixis.

Fed Fund futures , a widely used security for hedging short-term interest rate risk, have fully priced a 25-basis point tightening by the first quarter of 2023, unchanged from prior to the release of the Fed statement.

“We didn’t expect this policy decision to cause too many waves and that’s exactly what it’s looking like,” said Ryan Detrick, senior market strategist at LPL Financial. “The Fed is seeing improvement in the economy, but the economy still needs assistance they’re going to leave rates where they are.”

Still, some see risks ahead as the Fed prepares eventually to start raising rates.

“For me, I don’t think the issue is tapering, it is liftoff, and that’s where the risk is,” said Marcus Moore, Assistant Portfolio Manager, Zeo Capital Advisors, in the scenario where growth is strong. “As I think about my portfolio, the risk is that liftoff happens much sooner than the market is anticipating.”

Some, however, said the Fed needs to be more direct in communicating its plans to pull back its emergency-level support of financial markets.

“Tapering in a deliberate manner … is now so insignificant to the size of financial markets that not outlining a plan is more confusing than just putting one out there for markets to react to (or not),” noted BlackRock’s Rieder.