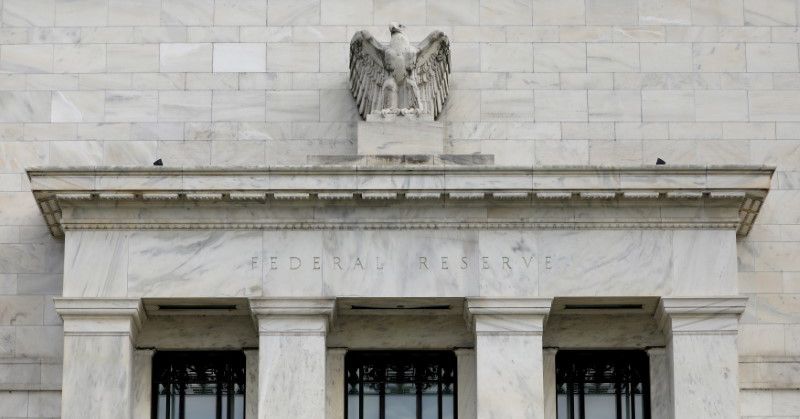 June 17 (Reuters) – A hawkish shift from the Federal Reserve has woken up a slumbering dollar, sending the U.S. currency to its highest level in months and stoking expectations that an unwind of bearish positions could fuel more gains.

The dollar was on track for its biggest two-day percentage increase against a basket of major currencies in 15 months on Thursday and stands at its highest level since mid-April, a day after the central bank shifted its first projected rate increase into 2023 in the face of surging inflation. read more

Betting against the dollar has been a popular trade for months, as the Fed’s insistence that it would maintain its ultra-dovish stance despite rising inflation drove the currency to a near 3-year low earlier this year.

The slightly hawkish shift in Wednesday’s statement appears to be changing that calculus: the prospect of a sooner-than-expected rise in U.S. rates boosts the dollar’s attractiveness to yield-seeking investors over currencies such as the euro and yen. Both Goldman Sachs and Deutsche Bank, for instance, after the Fed meeting recommended investors cut their bets on the euro rising against the buck.

“I think FX markets have finally awoken to the idea of earlier normalization from the Fed,” said Simon Harvey, senior FX market analyst at Monex Europe.

Large bets against the U.S. currency may accelerate the recent move if the threat of more gains pushes investors to reverse their bearish positions. Net bets against the dollar in futures markets stood at nearly $18 billion last week, a three-month high, according to data from the CFTC.

“In the coming weeks and months, the short-dollar thesis that has been so dominant and popular for much of the past year will be severely tested,” said Stephen Jen, portfolio manager at hedge fund Eurizon SLJ.

Momtchil Pojarliev, head of currencies at BNP Asset Management in New York, bought the dollar against the Japanese yen after the Fed meeting.

“The Fed has been patient, but we all know the Fed is going (to turn hawkish) at some point,” he said. “I didn’t think that it was going to be now.”

Because of the dollar’s central position in the global financial system, its fluctuations tend to ripple through a wide range of assets.

A stronger dollar tends to weigh on the balance sheets of U.S. multinationals, making it less favorable for them to change foreign earnings back into their home currency.

A rising greenback could also help tame a blistering rally in commodity prices that has helped boost inflation this year, as many raw materials are priced in dollars and become less affordable to foreign investors when the buck appreciates.

“With our view of rising rates, risky assets and equities will have difficulties,” said Kaspar Hense, a portfolio manager at Bluebay Asset Management, which oversees $60 billion. Hense went short the euro after Wednesday’s Fed meeting.

Some market participants, however, are maintaining their bearish views on the dollar, noting that the Fed’s easy money policies, which include the purchase of $120 billion a month in Treasuries, remain in effect. Other central banks are likely to follow the Fed’s lead in slowly normalizing monetary policy, potentially narrowing the gap in rates between the U.S. and other economies.

Goldman Sachs believes a global recovery will weaken the dollar over the longer term, while a report published by Societe Generale on Thursday showed a year-end price target of $1.27 for the euro, from $1.19 on Thursday.

“Clearly there has been technical, fundamental damage to the bearish dollar story, but I would like to see how the dust settles before determining if the dollar bear story is behind us,” said Paresh Upadhyaya, director of currency strategy and portfolio manager for Amundi Pioneer Asset Management.

“Now a lot of it is going to hinge on… what do other G10 and emerging market central banks do in response.”

Upadhyaya reduced his short dollar position heading into the Fed meeting but believes the currency will eventually head lower. Harvey, of Monex Europe, wants to see whether the next few weeks’ data will bolster the case for a stronger-than- expected recovery.

Others, however, think there could be room for more dollar gains.

Shorting the dollar “has been a popular trade for both discretionary and systematic managers,” said David Gorton, chief investment officer at hedge fund DG Partners. The “hawkish surprise from the Fed has perhaps exposed just how extended some of those short positions were.”