What isn’t in the new Nintendo Switch model is as interesting as what is, and it tells you a lot about both Nintendo’s business strategy and how it sees people using the system.

Nintendo announced Tuesday that a new version of its console, the Switch OLED, will come out Oct. 8, alongside the recently-announced Metroid Dread.

The existence of a new model was leaked months ago and consumer speculation has been rampant ever since. The Switch is currently the best-selling game console in the world, and has been for more than two years, but it’s not without its flaws.

It’s a low-powered system by design, for example, with a fraction of the horsepower of the PlayStation 5 or Xbox Series X. Many consumers and analysts have openly fantasized about the possibility of a “Switch Pro,” an upgraded edition like Microsoft’s Xbox One X, that would bring the Switch’s graphics closer to par with its console competitors.

More importantly, Nintendo has been unaccountably silent on the subject of “Joy-Con drift.” There’s a defect with the Switch’s multi-purpose, pack-in controllers that makes them wear out unaccountably quickly, particularly if they’re used to play high-impact games like Super Smash Bros. Ultimate.

Nintendo said in a statement to GeekWire that the Joy-Con controller configuration and functionality did not change with the OLED model. 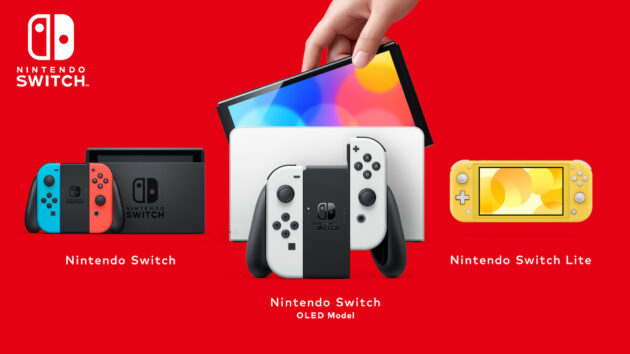 A hardware refresh would have been the perfect opportunity for Nintendo to address these issues.

Instead, the improvements on the Switch OLED are comparatively subtle.

It’s a distinctly better piece of technology than the launch version, the 2019 revised model, or the Lite editions of the Switch, with a number of features that will provide a distinctly better “quality of life” for users, but it’s still the same old Switch under the hood.

Those features include a slightly larger, brighter OLED (organic light-emitting diode) screen for crisper graphics in portable mode; more than double the built-in internal storage of the previous version; an adjustable stand built into the back of the unit; and a built-in Ethernet port for wired online play.

The last feature is more significant than it might look. Many multiplayer video games are very sensitive to lag, particularly the aforementioned Super Smash Bros. Ultimate, so trying to play them over a wireless connection is often frustrating.

The current model of the Switch only provides WiFi out of the box, unless players invest in a $30 USB LAN adapter. The move to add a built-in Ethernet port is one of the more online-friendly decisions Nintendo has made lately, particularly for the Smash scene.

Again, though, it’s just a quality-of-life bonus. The OLED edition of the Switch is a solid package for people who haven’t yet bought into the system, or who only own a Switch Lite. But for existing Switch owners, it’s hardly worth the upgrade.

To be fair to Nintendo, if a “Switch Pro” was ever on the table at all, this would’ve been a bad year for it. The ongoing chip shortage is still affecting electronic manufacturing worldwide, to the point where even the new OLED screen for the Switch is likely to be affected. Producing a new, higher-powered Switch in the current climate was likely to be a pipe dream.

So why bother with a new version of the Switch at all?

For one thing, most of the bonuses on the OLED edition are specifically there to benefit the hardware’s portable mode. It’s easier to position, holds more games, has better sound, and features a slightly larger, better-looking screen. That suggests that as far as Nintendo is concerned, the primary audience for the Switch treats it as a portable system.

More importantly, releasing a new Switch now, at this point in the system’s life, is one of Nintendo’s oldest tricks. All of its older portable systems, such as the Game Boy, DS, and 3DS, went through multiple hardware revisions across their lifecycle.

It’s often seemed ridiculous to Nintendo fans, but from a business perspective, there’s a method to the madness here, as explained by the NPD Group’s Mat Piscatella:

Back in the day, Nintendo portable revisions would stabilize the demand curve and firm up ASPs. They were about maintaining sales performance, and preventing the pull of price drops and stale inventory. The Switch OLED is right out of this successful playbook.

Existing Switch owners may be disappointed here, and with good reason, but the Switch OLED isn’t aimed at them. A handful of diehards may take the opportunity to switch up to the next model, but the OLED is pitched entirely at new buyers, as well as continuing to justify the Switch’s current price tag.

It is interesting to see Nintendo following its blueprint from its portable systems for the Switch, however, as opposed to its previous generations of console hardware. While there were end-of-life new models of the NES and SNES, as well as the Jumper Pak add-on for the Nintendo 64, Nintendo tended to approach its consoles in a more traditional way. What you got in a Nintendo console on launch day was more or less what you’d get if you bought one the day before they were discontinued.

With its handheld systems, however, Nintendo freely used small hardware changes and cosmetic changes to try to bring new audiences to each system. By adopting a similar practice with the Switch, it suggests that Nintendo is adopting a similar strategy with all its old handhelds. These incremental improvements and new colors aren’t there to try to milk the existing audience; Nintendo’s trying to pull in new buyers here.

This also seems to indicate that, at least from Nintendo’s perspective, the Switch’s portability is a major factor in its success, if not the primary reason thereof, and is likely to continue to be a development priority going forward.

For the moment, though, the Switch OLED is Nintendo not trying to fix what isn’t really broken. While the Switch has its issues, and those aren’t addressed in any real way by the OLED, the new version is distinctly the best Switch yet. On paper, it’s an easy pick-up for new fans, fence-sitters, or people who intend to start traveling again, especially as 2021’s holiday season starts up. The Switch OLED definitely isn’t what the enthusiast crowd was looking for, but it’s the latest use of a successful strategy that Nintendo’s been using for almost 30 years.