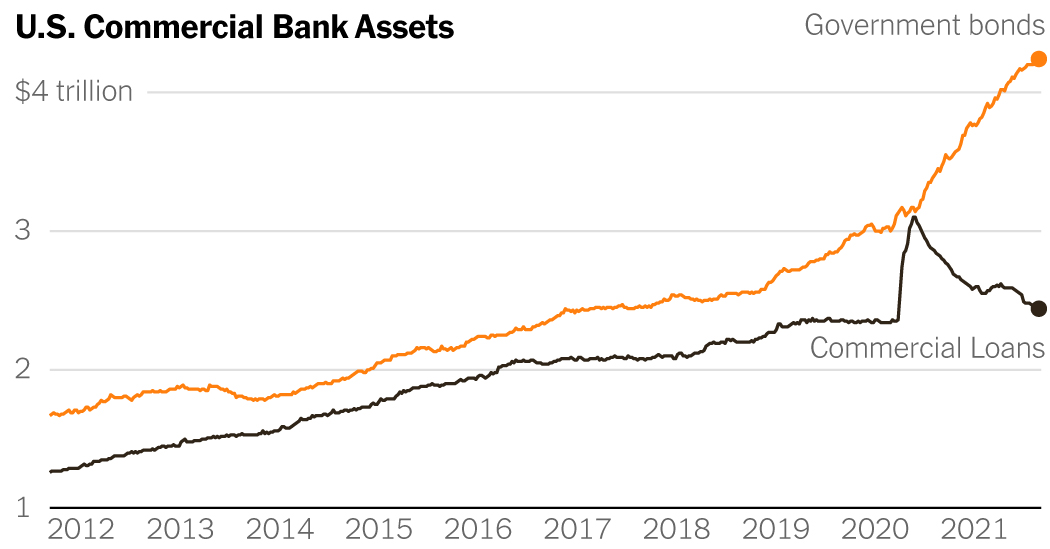 The economy is growing. Businesses are hiring. Stocks are marching ever higher. And banks are sitting on big piles of cash.

If only they had a better place to put it.

Lingering supply chain problems and anxiety over the potential for the Delta variant of the coronavirus to upend the economy again have pared back borrowing by businesses. And consumers flush with cash thanks to government stimulus efforts aren’t borrowing heavily, either.

So banks have largely been left to invest in one of the least lucrative assets around: government debt.

Rates on Treasury bonds are still near historically low levels, but banks have been buying government debt like never before. In the second quarter of 2021, banks bought a record of about $150 billion worth of Treasurys, according to a note published this month by JPMorgan analysts.

It’s a strategy that’s almost guaranteed to produce skimpy profits, and banks are not thrilled to be doing it, analysts say. But they have little choice.

“Widget companies make widgets, and banks make loans,” said Jason Goldberg, a bank analyst at Barclays in New York. “This is what they do. It is what they want to do.”

By putting their customers’ deposits into investments such as loans or securities, like Treasury bonds, banks make the money needed to pay interest on those deposits and pocket a profit. When the economy is growing — like now — banks usually have no problem finding borrowers as consumers make big purchases and businesses expand. These loans provide better returns than Treasury bonds, which are usually reserved for times of uncertainty because banks will accept their lower rate of return in place of a risky loan.

Borrowing briefly spiked when the pandemic hit, as companies tapped lines of credit. But the now-booming economy isn’t producing demand for loans, just as banks have plenty of money on hand to lend.

Businesses either have enough cash already, have other ways to raise money or see little reason to undertake a risky expansion amid the still-smoldering pandemic. And consumers are not only avoiding new loans, they’re paying older ones off, thanks to the trillions of dollars the federal government spent to cushion the financial blow from the pandemic.

“There’s been this economic expansion coming out of what was a significant contraction,” said Bain Rumohr, an analyst covering North American banks at the credit rating firm Fitch. “And typically what would happen would be, yes, increased demand on the corporate side and on the consumer side. And that just has not manifested itself yet.”

The lackluster demand for loans reflects the government’s success in protecting companies and households from ruin during the pandemic.

Across two presidential administrations, the federal government embarked on a major program of borrowing and spending to help small businesses, large corporations and households weather the worst of the shock. Between March 2020 and May 2021, Congress appropriated about $4.7 trillion on such programs, through the passage of six pieces of Covid-19 relief legislation signed into law by President Donald J. Trump and President Biden.

Much of that money has poured into the bank accounts of American households and companies. By the end of May, nearly $830 billion in stimulus check payments had been sent to individuals. Roughly $800 billion more was sent to businesses in the form of programs such as the Paycheck Protection Program. And about $570 billion was spent on extended and enhanced unemployment insurance benefits, according to data from the Government Accountability Office.

It worked. While the downturn was steep, the coronavirus recession is the shortest on record, lasting a mere two months, and the economy has already more than recovered its losses.

But for banks, that flood of government payments was a mixed blessing.

It doubtlessly kept them from suffering losses on loans to individuals and companies that would have otherwise defaulted. But it has also resulted in much healthier bank account balances for both corporate and consumer America. Deposits in the commercial banking system are up nearly 30 percent since just before the pandemic, to roughly $17.3 trillion.

To make money, banks have to reinvest those dollars that are at rest, but that’s proving to be difficult. Not only do companies and households have plenty of cash of their own, their desire to borrow has weakened as the Delta variant complicates reopening plans.

Uncertainty about office reopenings seems to be slowing loan demand from commercial real estate developers, a normally lucrative source of loans. Other reliable sources of borrowing have also slowed down: Car dealerships, which take loans to keep their lots stocked, aren’t borrowing as much because supply chain snarls have weighed on automobile production.

Banks have acknowledged their struggles to find attractive ways to deploy their deposits.

Last month, Bank of America’s shares stumbled after it reported earnings that disappointed investors, in part because of a slower-than-expected recovery in loan balances. When asked by analysts about one profitable area where loan balances had declined — the high-interest-rate credit card balances that people don’t pay off every month — Bank of America’s chief executive, Brian Moynihan, explained the decline simply.

“They just have more cash,” he said. “And so they paid off their credit cards, which is a completely responsible thing for them to do.”

It was a common refrain. Wells Fargo experienced a decline in commercial lending during the second quarter, explaining that its customers “continued to have high levels of cash on hand.”

Michael Santomassimo, Wells Fargo’s chief financial officer, told analysts that there were “green shoots” in certain industries, but that overall “demand has not yet picked up.”

And M&T Bank, a Buffalo-based lender with a focus on the Northeast and Mid-Atlantic States, had fewer loans on its books at the end of the quarter as the bank struggled to find profitable places to put money.

“Customer deposits are at all-time highs and grew faster than our ability to deploy them into assets,” Darren J. King, the bank’s chief financial officer, told analysts.

And so the banks have turned to government bonds, where interest rates have been low for more than a decade. When the yield on the 10-year Treasury note briefly rose to around 1.75 percent in March and April, banks hungry for higher returns rushed to buy them — a scramble that helps explain why the spike in interest rates didn’t last, analysts say.

Bond yields move in the opposite direction of bond prices, and as long as banks have few better alternatives, they’ll keep buying bonds. And that could help keep a lid on rates for some time to come.

“It is one of the things keeping rates lower,” said Gennadiy Goldberg, a senior analyst covering the government bond market at TD Securities in New York.

The dynamic is unlikely to change until companies and entrepreneurs have a better sense of certainty about future economic conditions, something the Delta variant is preventing at the moment by making the flow of goods to manufacturers and the flow of workers back to work difficult to predict.

Companies certainly would like to invest more, said Mr. Goldberg, the Barclays analyst. “But given supply chain constraints and, I think, difficulty finding skilled workers, they’ve been slow to put that money to work.”