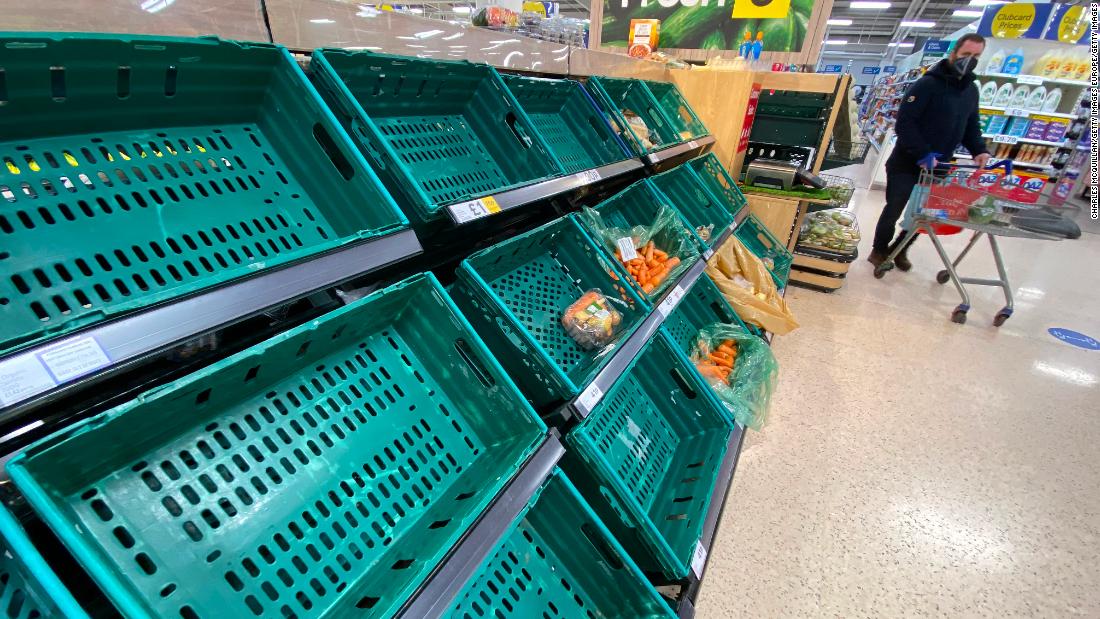 While it should be a source of embarrassment for the PM that his deal has made life very difficult for many of the industries that he has championed post-Brexit, Johnson’s public statements on the matter suggest he is oblivious to the reality that many are facing.

When asked for comment on the immediate consequences of the trade barriers implemented as a result of the deal, a UK government spokesperson told CNN Business:

“From the outset we were clear that we would be leaving the customs union and single market which meant that there would be new processes after the end of the Transition Period. These were widely communicated through our public information campaign.”

The starkest example of what Brexit is doing to British business comes from Scotland’s fishing industry. Despite the government’s claims during Brexit negotiations that the fishing industry was very near the top of its priority list, there is a real fear that the entire industry could collapse in a matter of weeks.

“We had an entirely new system for exporters to get their heads around that hadn’t been tested prior to use. The result, somewhat inevitably, was that it started going wrong straight away,” says James Withers, chief executive of Scotland Food and Drink.

“This isn’t as simple as an IT glitch that needs fixing. In a matter of days, we went from being able to send fresh food to Madrid with a single cover sheet of paperwork. Now there are roughly 26 steps for each transaction.”

The real-world impact of this means that some exporters have had the European market cut off overnight. Almost every day, pictures circulate on social media of virtually empty fish markets and boats tied up. Withers has heard stories of Scottish boats sailing 48 hours to process catches in Denmark, just to get their stock into the single market. In an industry where profit margins are often thin, every hour spent working around red tape is critical to both the freshness of the product and the productivity of the business.

When pushed on the matter, Johnson has said that he thinks these are merely teething issues and not the fault of his deal or the barriers it’s created. His spokesman explains that the government is providing £23 million ($31.4 million) for the industry to ease the process.

When asked specifically about the fishing industry earlier this week, Johnson once again denied that the problems facing exporters had anything to do with his deal, but instead were due to restaurants being shut because of the pandemic.

However, Withers believes that money “will run out quickly” and without coming to some new sort of arrangement with the European Union, “this sort of exporting might not be sustainable” and will “almost certainly lead to the very people the [Prime Minister] said he was fighting for losing their jobs.”

The scenes in Scotland might not be as dramatic as the food shortages and lines of backlogged trucks that many predicted post-Brexit, but the damage is already showing up in economic data. Brexit issues are exacerbating a slowdown caused by pandemic restrictions, IHS Markit said on Friday, and lengthening suppliers’ delivery times. While 33% of manufacturers reporting a drop in exports linked the decline directly to the pandemic, some 60% linked the drop to Brexit, according to IHS.

ForagePlus, a horse nutrition business based in Wales, had dozens of parcels bound for Europe returned this week due to glitches in its shipping company’s new systems for processing customs information. “It’s just a shambles basically,” ForagePlus founder Sarah Braithwaite told CNN Business, adding that it had been nearly a month since the company was able to ship anything into Europe due to the pandemic and Brexit.

There is real concern among trucking companies and logistics firms that things are going to get much worse in the coming months.

Multiple sources within the affected sectors told CNN Business that British consumers won’t feel much disruption yet, as January is a typically quiet month at ports and the United Kingdom did stockpile goods to prepare for a possible no-deal Brexit. But that could change as trade volumes increase over the coming months, putting border systems under additional pressure.

This could result in a gradual reduction in the variety of fresh produce available to British shoppers. According to a spokesperson for Logistics UK, “in the short term, while supply chains sort themselves out, it may be that we return to a more seasonal approach to shopping or have a more limited range to choose from.” This could mean that after decades of fresh fruit and vegetables at all times of the year, Brits might have to start seeing strawberries as summer treat, for example.

The region where food shortages could fast become a real issue is Northern Ireland, where images of empty supermarket shelves have circulated on social media. Due to the unique position of Northern Ireland, it has split with the rest of the United Kingdom and remained inside the EU single market, making it a lot harder to import food from Great Britain. Simon Coveney, Ireland’s foreign affairs minister, said that images showing empty shelves in Northern Irish supermarkets were “clearly a Brexit issue” and “part of the reality” of the United Kingdom leaving the European Union.

Trade experts are concerned about the gradual decline in EU-UK trade. “The slow decline is in some ways more dangerous than sudden food shortages,” says David Henig, UK director at the European Centre For International Political Economy. “I am particularly concerned about exporters being unable to fulfill orders and losing customers or just giving up completely. The long-term message that sends could be very damaging for inward investment,” he adds.

There are legitimate questions as to why things have been so bad, despite the United Kingdom having years to prepare for the cliff edge. “We’ve known about the risks of not being prepared for five years,” says Anna Jerzewska, founder of Trade and Borders, which assists exporters and importers across Europe.

Jerzewska says that her clients are reporting numerous complaints, but most worryingly a failure of support from the UK government to resolve their issues. “Getting an answer to a technical question could take 48 hours, which is obviously a problem for fresh produce. People in the call centers can only really point to guidance, but the guidance isn’t currently fit for purpose.”

And despite everyone involved working hard to resolve the early issues, Jerzewska fears this won’t be enough to save struggling British exporters. “At the moment it’s shock, but the underlying costs are not going away. And for traders who work at thin profit margins, an extra couple of percentage points could be the end.”

Many of Johnson’s Conservative lawmakers are struggling with how to reply to their constituents. “The party gave us lines to read out when the deal came through presenting it as a huge success, but as time goes on, it’s clear there’s quite a lot of nasty surprises in Pandora’s box,” says one Conservative member of parliament who is not permitted to speak on-the-record about government policy outside of their brief.

Others say that small local businesses are up in arms at finding out that if they want to visit Europe to sell their goods, they might need a work permit from foreign governments or paperwork allowing them to move goods into the European Union.

There isn’t much optimism that things will improve in the near future among moderate Conservatives. Many are extremely worried that the gradual decline caused by Brexit will ultimately lead to Europe trying to lure Britain’s golden goose to the continent: The City of London, which hosts many of the world’s biggest banks.

“Once the fog of Covid lifts, financial and professional services firms looking to expand globally will see London and realize that we have given up quite a lot of our competitive advantage,” says the Conservative member of parliament.

The trade deal Johnson signed bizarrely didn’t address either of these, despite them making up a huge part of the UK economy. Banks and traders in London are now hoping to be granted “equivalence” by the European Union, a designation that would allow them to continue serving EU clients with limited disruption.

“If no deal is reached on equivalence for financial services or data, that could kickstart a squeeze on the city from EU regulators and leave businesses wondering what the benefit of setting up in London is if you want to serve the European market,” says Henig.

The European Union and United Kingdom are supposed to reach an agreement in March on financial services, but the mood music from both London and Brussels right now suggests that the United Kingdom is unlikely to be pulled back into the EU regulatory sphere any time soon.

Many Brexiteer lawmakers felt vindicated when the world didn’t fall off its axis in the immediate aftermath of Brexit, as plenty of the anti-Brexiteers’ worst nightmares failed to materialize. However, if the current trajectory of gradual decline continues, the slide could become uncontrollable.

Those politicians will have to explain to voters why they encouraged their prime minister to pursue such a hard Brexit despite the warnings of its consequences. They have a couple of months before things get really bad to put pressure on Johnson to start engaging with the reality of Brexit a little more.

The question that matters most to those struggling is how bad things must get before those who most vocally supported Brexit are willing to break ranks and admit the truth: that leaving the world’s largest trading bloc has immediate consequences.