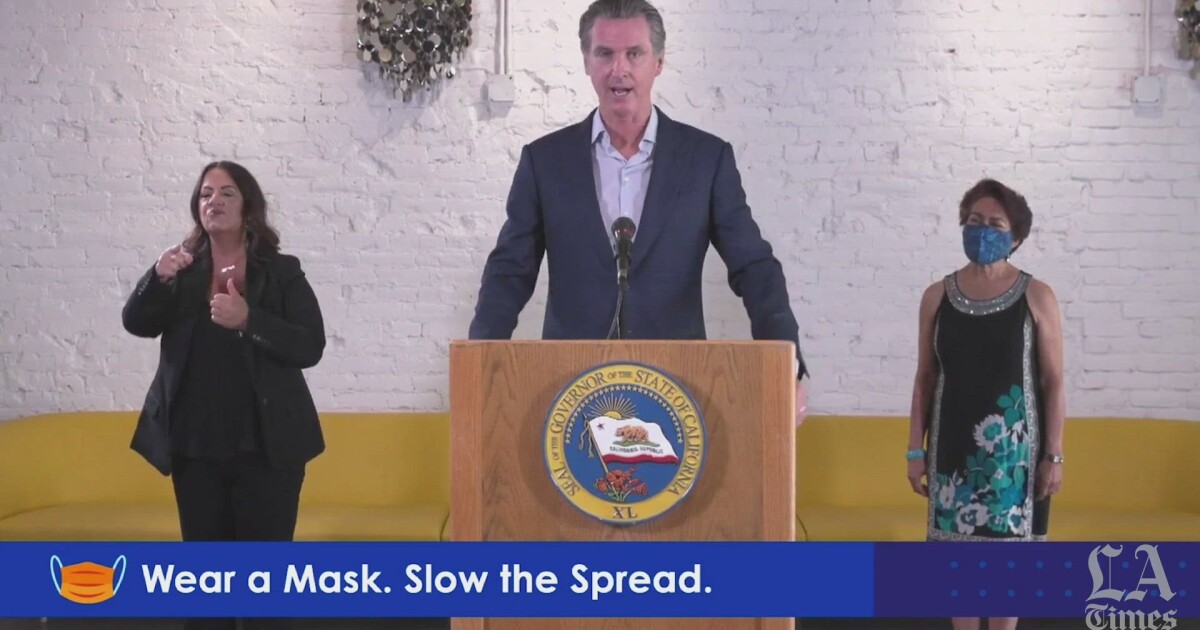 Gov. Gavin Newsom signed a trio of laws on Wednesday intended to bolster struggling small businesses in California and encourage their owners to hire more workers, each of which received bipartisan support but only light scrutiny by the Legislature before its adjournment last week.

The governor, who used a delicatessen in Sacramento as the backdrop for a bill-signing ceremony, touted the three laws as important help for businesses that are “the lifeblood of California and its economy.”

“Small businesses are feeling vulnerable to the pressures of this pandemic — so much so that they believe they are likely to close in the not too distant future, ” Newsom said, citing a survey that he said found 44% of businesses were considering closure. “That is a jaw-dropping percentage of small businesses that are looking at the prospect of a financial cliff.”

One effort will ensure coronavirus loan funds that are forgiven aren’t treated as taxable income. Newsom said the second bill, enacted as part of the state budget, will accelerate the use of various bond funds — though it mostly focuses on a variety of proposals unrelated to helping businesses. The third offers up to $100 million in tax credits for small businesses that have suffered during the pandemic but also agree to hire new or laid-off workers.

None faced opposition in the Legislature, and all were easy for Newsom to embrace — three of some 400 bills he must sign or veto by the end of the month.

The loan forgiveness plan safeguards California business owners against any tax increase triggered by the use of federal Paycheck Protection Program funds. PPP was one of several spring COVID-19 relief strategies deployed by President Trump and Congress. Businesses with 500 or fewer employees were eligible for PPP loans to help cover payroll and other operational expenses. In some cases, those loans were allowed to be converted to subsidies.

The law signed by Newsom excludes the forgiven loans from being treated as income subject to California taxes. Although that means less tax revenue collected by the state, a legislative bill analysis suggests the overall impact may be limited because a business owner cannot claim tax deductions for expenses paid with PPP funds.

But the new law offering tax credits to small-business owners will have a clear and immediate effect on the state budget, and received far less review by legislators. Drafted by the governor’s financial team, the $100-million tax break makes good on Newsom’s promise last month to enact a so-called “Main Street hiring credit” to incentivize some small businesses to restore jobs eliminated earlier this year by the coronavirus-induced recession.

The law offers a tax credit to many California companies that had 100 or fewer employees at the end of 2019 and then experienced at least a 50% drop in gross receipts as COVID-19 slowdowns hit during the second quarter of 2020. Those businesses will receive a $1,000 tax credit for each qualified employee hired between July and the end of November, up to $100,000 per business.

The business will have five years to use the credit and can apply it to any taxes owed, including sales and use taxes.

Whether the proposal will work, and its exact cost to the state in the form of reduced tax revenues, is unclear. Jay Chamberlain, the chief of the financial research unit of the California Department of Finance, told lawmakers in a brief committee hearing on Aug. 30 that uncertainty was one reason the tax credits were capped at a cost to the state budget of no more than $100 million.

“We don’t really have real good data on how many businesses are going to meet the criteria for this credit,” Chamberlain said.

But with any single business eligible to receive up to $100,000 in tax breaks, the program could benefit as few as 1,000 California companies. And there is no formula in the plan to assess relative need beyond a requirement that the business has lost 50% of its gross revenues — an omission noted by supporters of the law during last month’s hastily called meeting of the Assembly Revenue and Taxation Committee.

A committee analysis noted that the law’s “first-come, first-served” structure left open the possibility that it would “primarily benefit relatively sophisticated businesses at the larger end of the small business range,” noting that “these businesses often benefit from accounting and legal advice unavailable to or underused by ‘mom and pop’ operations.”

Assemblyman Marc Levine (D-San Rafael), the only member of the committee to vote against the proposal during the short hearing, said the businesses that benefitted might be those that were already in the process of hiring or rehiring for positions cut during the spring and early summer.

“We’re really taking some easy wins with a tax credit so that we can claim that we’ve created more jobs through our legislation,” Levine said, “when in fact these are jobs that probably would be created by a growing economy.”

All three laws take effect Jan. 1. The tax credits that will be handed out will expire — whether a business owner uses them or not — on June 1, 2026. Details for applications and approvals must be drafted this fall by the California Department of Tax and Fee Administration.