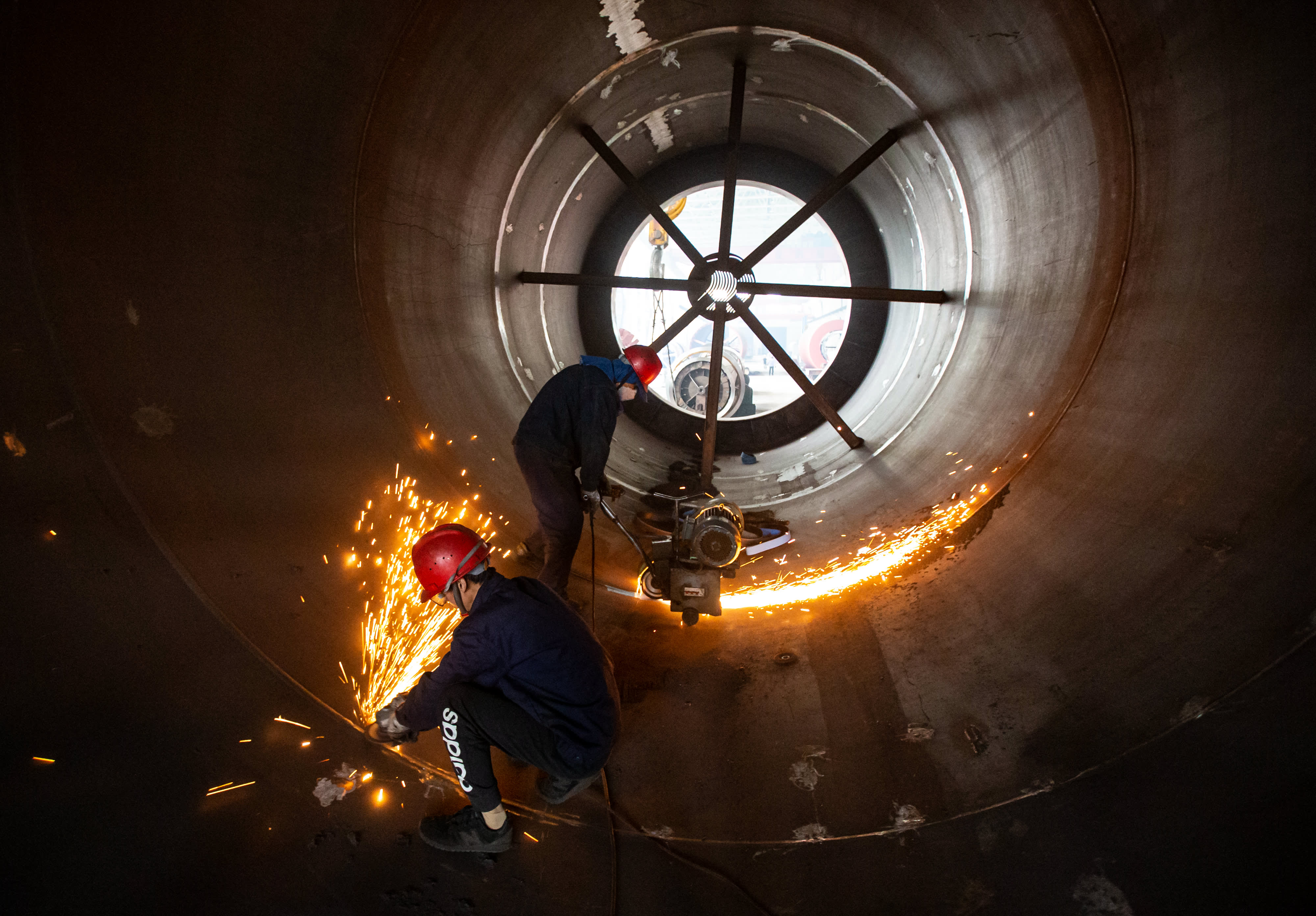 Workers make a rotary kiln at the workshop of Jiangsu Haijian Stock on May 26, 2021 in an eastern province of China.

BEIJING — The global surge in commodity prices is adding another burden to China’s small businesses, many of which have barely put the coronavirus pandemic behind them.

In a sign of how severe the problem is, Chinese Premier Li Keqiang and other leaders emphasized at a meeting Wednesday they would increase support for privately run businesses — first, in the persistent issue of getting financing, and second, for coping with rising prices of raw materials.

The statement marked the latest central government announcement in the last few weeks on record high commodity prices, as authorities rush to limit the negative impact on the economy.

If businesses selling to consumers keep prices steady in order to remain competitive, the rise in commodity prices will cut into profit margins.

Already, on Thursday, China’s statistics bureau said industrial profit growth slowed to a 57% year-on-year increase in April, down from 92.3% in March. Although these figures are distorted by the contraction of the economy in the first quarter last year, the bureau noted the negative impact of rising commodity prices, among other factors.

The cost of raw materials as measured by the producer price index rose 6.8% from a year ago in April, the fastest pace in over three years. But consumer prices edged up just 0.9% as pork prices fell.

The persistently large gap between producer prices and consumer prices has greatly reduced profitability for manufacturers, and they can only maintain normal operations by reducing other costs, Gu Shuangfei, commodities analyst at Hangzhou-based brokerage Nanhua Futures, said Wednesday.

CPI will likely remain steady in the future, given macroeconomic policies and household income levels, Gu said, noting that as a result, government policy will focus on controlling raw material prices and ensuring stable business operations.

Even in China’s state-dominated economy, small, privately run businesses contribute to the majority of GDP growth, tax revenue and jobs. The meeting Wednesday of the top executive body, the State Council, noted there were a total of about 139 million small, micro-sized and individually run businesses as of the end of April.

Authorities have repeatedly stated in the last several months that pressure on employment remains high, despite the overall economy’s recovery from the pandemic. This week’s State Council meeting said measures to help small businesses cope with rising commodity prices include local subsidies for employment.

As commodity prices rise and economic activity picks up, some businesses are taking out more loans to support future growth.

He expects loan demand will remain strong in the near future. Many of the company’s clients operate in infrastructure-related projects like bridges and toll roads, he said. Loans for new customers can be processed in as quickly as two weeks, with an average size of about 2 million yuan, or about $312,000, Ng said.

Prices for commodities such as copper and iron ore have surged to record highs this year, each of which are up more than 20% for the year so far. Analysts attribute much of the increase to investors’ expectations of growing global demand for the raw materials, as business activity resumes and local governments maintain looser monetary policy to support growth.

China’s monetary policy has been relatively more conservative. But the country is the world’s largest consumer of copper and other commodities, and demand from China influences prices globally. The country is also home to major exchanges for trading commodities futures.

“Commodity prices are disconnecting from fundamentals, building up downside risks” for the second half of the year, Morgan Stanley economist Robin Xing and his team said in a report Wednesday.

They expect China’s producer price index will reach its highest point for the year in the second quarter, but have limited impact on consumer prices. The resulting squeeze on margins will likely persist in the near term, before easing in the second half of the year, the Morgan Stanley analysts said. They expect strong global demand will help support profit.

China’s official Purchasing Managers’ Index, a gauge of business activity in manufacturing, is due out Monday. The producer price index and consumer price index for this month are set for release on June 9.