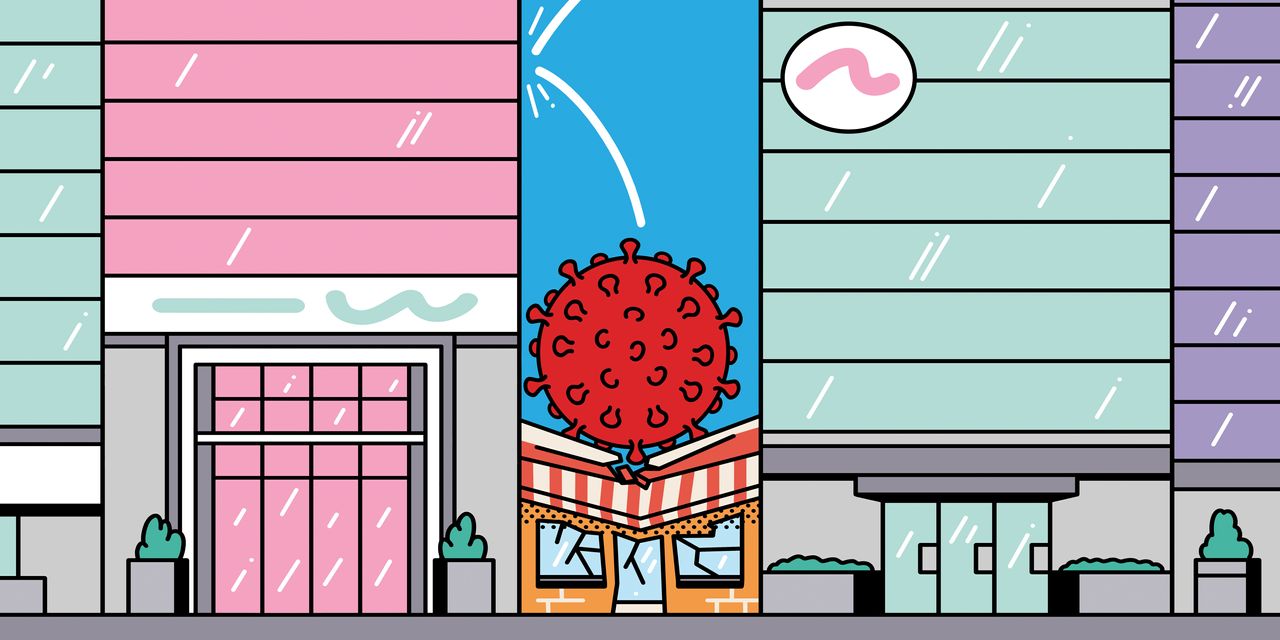 Small businesses have been at the losing end of the U.S. economy for decades, but nothing has diminished their stature like the Covid-19 crisis. Thousands of small firms have been driven out of business while their larger counterparts have largely survived and, in some cases, even flourished.

The danger is that as a result U.S. economic power will reside in fewer hands, diminishing the innovation and entrepreneurship that have helped drive the country’s success.

In 1989 businesses with fewer than 100 employees accounted for 40% of the workers employed by all U.S. firms, according to the Census Bureau. Newly released data show that as of 2018 that had fallen to 33%.

Now it is almost certainly even lower. Small-business transaction data collected by software and business-services provider Womply show that about 1 in 5 businesses that were open in January have stopped transacting entirely. Most of them have likely closed for good. In a recent survey of 6,325 small-business owners conducted by small business social-networking company Alignable, 42% of respondents said they were at risk of going out of business in the fourth quarter.

Big businesses are faring far better. While there has been an increase in bankruptcy filings among public companies, including high profile ones from department store

so far they are running far below the numbers reached following either the 2008 financial crisis or the 2000 tech bubble. Moreover, to judge from the recovery in stocks since Covid first gripped the economy, investors aren’t terribly worried that a wave of failures is about to hit.

Much of the contrast in the fortunes of small and large businesses has been driven by differences in the financial resources available to them.

Bank loans rank as the principal source of outside financing for small businesses. Those loans have been hard to get since the Covid crisis struck. In the Federal Reserve’s third-quarter survey of senior loan officers, conducted in July, 70% of respondents reported tightening lending standards for small firms—the most since the fourth quarter of 2008, when the financial crisis struck. Much of the money many small businesses received from the federal government earlier this year through the $669 billion Paycheck Protection Program has by now probably been spent. The Fed’s Main Street Lending Program, aimed at small and medium-size businesses, has so far had little uptake among lenders the central bank is relying on to underwrite loans.

Large, public companies, on the other hand, have been able to readily access capital markets for funding—thanks in no small part to the ample liquidity that the Fed has been providing to financial markets as part of its efforts to dampen the recession. Securities Industry and Financial Markets Association data show that in the first nine months of this year companies issued $1.9 trillion in bond-market debt. That compares with $1.1 trillion over the same period last year when economic conditions were much better.

Public companies also have been taking advantage of lofty stock market levels, and through September this year have raised $185.4 billion in equity offerings versus $111 billion in the year-earlier period.

The challenges that small businesses are now facing could cast a pall over the U.S. economy for years to come.

Small businesses—or rather, the fraction of young, fast-growing ones that become much larger firms—have long been the major source of job growth for the U.S. economy. The fewer that are left standing when the crisis finally passes, the thinner the ranks of companies that eventually could rise to become major U.S. employers. As a result, labor market gains could be diminished, slowing the pace of economic recovery.

By the same token, a reduction in the number of small business amounts to a reduction in competition for larger firms. That could reduce big companies’ need to innovate in order to maintain market share, ultimately damping the dynamism of the U.S. economy. Competition for labor would be further reduced, limiting workers’ ability to command higher pay and further eroding workers’ share of the economy’s spoils.

Another round of support for small businesses from Washington—like the Paycheck Protection Program that passed earlier this year, but perhaps without so many strings attached—could help mitigate economic losses down the road. But with chances of another stimulus package coming before election day looking slim, there is a rising risk that by the time help arrives for many small businesses it will already be too late.

Appeared in the October 10, 2020, print edition as ‘Covid’s Toll on Small Business Is Everyone’s Problem.’