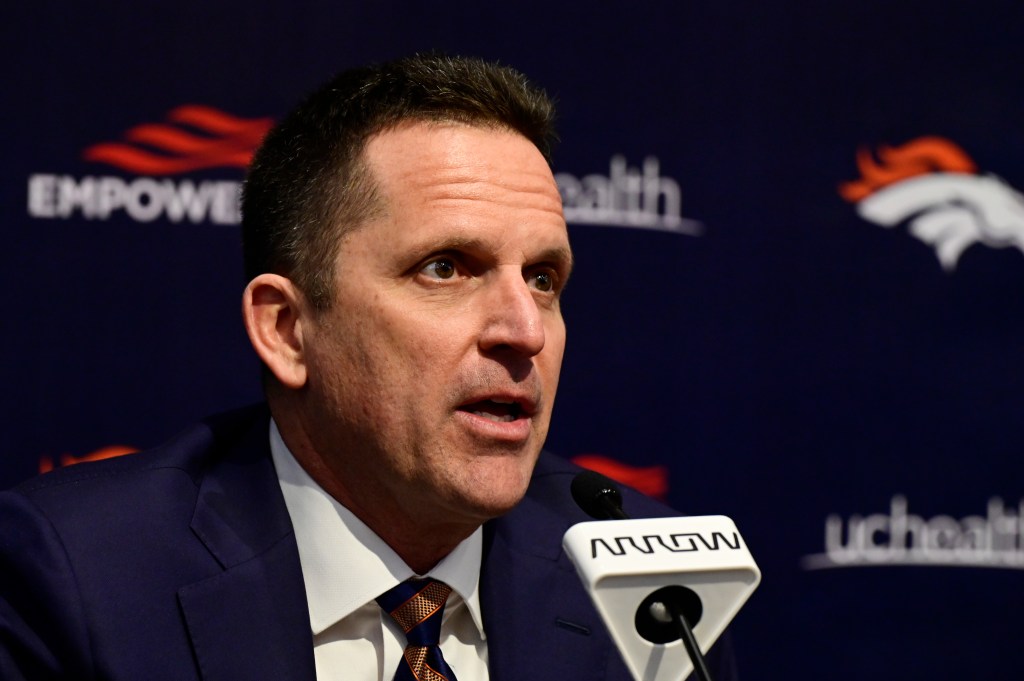 1. Broncos general manager George Paton is aware of the AFC West arms race but said his organization’s focus remains internal. “You always know what’s going on in the division and obviously the teams are stacking up,” he said. “We’re worried about the Broncos and getting up in the division. We haven’t really competed in our division in five or six years. It’s hard for us to talk about competing in our division until we do it. We need to worry about ourselves.”

2. Paton said of Kansas City trading receiver Tyreek Hill to Miami: “I’m sure he’ll do great.” So what does Paton make of the Chiefs? “Until they trade the quarterback (Patrick Mahomes) or head coach (Andy Reid), I’m probably not going to worry about (them falling off) too much. They still have a lot of good weapons, one of the best coaches and one of the best quarterbacks and they’ve obviously set the standard and we have a long way to go.”

3. Because the Broncos have a new coach in Nathaniel Hackett, they are eligible to begin their offseason program April 4, two weeks before teams with returning coaches. But Paton said the Broncos will officially start April 11. “It’s going to be good to get (the players) with this staff and start the process,” he said.

4. Hackett on his goal for the offseason program: “I think right now, the biggest thing is learning the language of the systems. It’s like learning any language — there are a lot of different things that go into it and you want everybody to feel very comfortable to get on the field and execute. (The goal is) just making sure they understand the formations, protections and run (plays) and the whys of everything we’re doing so we can get rolling.”

5. Paton said the Broncos have not closed the door on free agents Kareem Jackson (safety) and Melvin Gordon (running back). “Spoken with both of their agents,” Paton said. “It’s ongoing. Really good players.”

6. Hackett endorsed the signing of backup quarterback Josh Johnson. “I love Josh,” he said. “I’ve known Josh for a long time and he’s just a true veteran and a true professional. I’m excited to get him in the room.”

7. Who will compete where on the offensive line, aside from Garett Bolles at left tackle, will be a mix of well, everybody and every spot. “We’re going to throw everybody everywhere and everybody knows they have to come in and compete and learn the system and understand what to do,” Hackett said. “We’ll get the best five out there. It’s not necessarily people going for one spot. They have to train at all the spots so if something happens, they can play anywhere at a high level.”

8. Hackett worked with new right tackle Billy Turner the last three years in Green Bay and Turner is back for a second tour with the Broncos. “Billy’s ability to play as many positions as he did for us was unbelievable,” Hackett said. “To have that (versatility) was huge as a coach because you can put the best five out there. From his run blocking to back-side cut-off (blocks) to (pass) protection, he works so hard. He’s a football guy.”

9. The Broncos are non-committal about where Baron Browning will play. He started at inside linebacker down the stretch last year, but the team signed Alex Singleton last week to a one-year contract. “We’re still working through it, but (moving him to outside linebacker) has been talked about,” Paton said. “Probably the best thing he did in college was come off the edge and rush the passer. We’re going to look at it.”

10. The Broncos currently don’t have their initial draft pick until No. 64 next month, but also have two third- and fourth-round choices apiece. “I think it’s a really good edge (rusher) class, I like the cornerback class and the offensive tackle class,” Paton said. “I do think it’s a strong draft, especially in the middle (rounds), where we’re picking.”