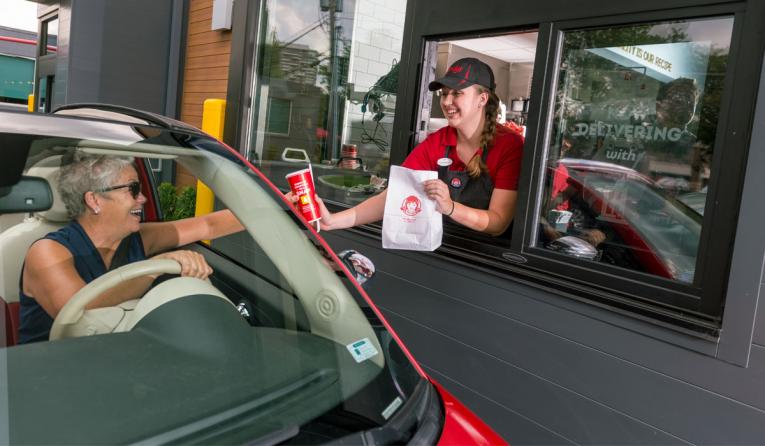 Wendy’s has a program where it recertifies every employee annually in food safety training. Team members dedicate an additional 700,000 training hours each year, the company said, to support the introduction of new products and procedures. Restaurant managers and multi-unit operators also have the option to participate in “Wendy’s University,” which includes targeted training intended to develop management and leadership skills. The program provides programming for company management, such as diversity training, people manager training, leadership dialogues, and the opportunity to participate in third-party conferences.

One thing that’s interesting to consider is Wendy’s breakfast launch. The brand planned to go full-tilt in early March. And one of the ways it wanted this effort to differ from past attempts was on the labor front. Namely, the chain launched a massive hiring campaign in 2019 to bring in roughly 20,000 new workers to support the daypart expansion.

With COVID restricting mobility and hampering breakfast in particular, Wendy’s worked last year to reduce breakfast breakeven by about 35 percent to help operators. It cut labor requirements and chose not to collect marketing fund contributions on breakfast sales.

Yet the good news, Esposito says, is the ramped-up campaign helped Wendy’s identify plenty of interest among candidates. And breakfast, from the hours to the drive-thru focus, gave the chain some flexibility in what it can offer.

All of this isn’t to say Wendy’s doesn’t have its work cut out in 2021. Esposito says the labor challenge isn’t subsiding. And creating an attractive workplace isn’t the task it once was. People not only have ample options to browse, but they’re also concerned with joining brands that reflect their value system. It doesn’t have to just be a place that pays and offers solid benefits; it needs to be a tribe they want to join.

Why exactly? It’s not a complicated premise: If you consider the applications versus actual hires gap, workers today don’t need to take a job simply to take one. They can search past the general perks commonly found. So the same marketing efforts brands spend on trying to appeal to like-minded guests, from sustainability to culture, have to apply to recruitment.

Wendy’s is fast pouring resources into this notion. It created a “Diversity, Equity, and Inclusion” function, led by a newly created position of chief diversity, equity, and inclusion officer. The brand hired Dr. Beverly Stallings-Johnson in early March 2021. She previously served as chief diversity officer for the city of Columbus.

One of the key internal efforts, though, is Wendy’s “Employee Resource Groups,” which have grown to six different fields.

Each ERG has a senior leader tied as the executive sponsor. They enable employees to learn, share, and network, Esposito says, and yet also help Wendy’s corporate get a grip on what’s happening throughout its worker base.

In 2020, Wendy’s also launched the Parents & Caregivers Support Group, providing a forum for informal discussions focused on family and caregiving challenges, as well as information to ensure employees can take full advantage of Wendy’s Employee Assistance Program. This group created a “Having a Baby Guide,” which provides information for employees before or after the birth or adoption of a child.

Esposito calls the ERG program one of Wendy’s true “shining stars of 2020” and one of those things that won’t ever return to how it was before COVID. Chiefly, in the way it’s spread outside of Wendy’s support center, and also in the broader issues it now addresses.

The Black group, for instance, was formed out of the racial injustice issues that took center billing last year. CEO Todd Penegor is the sponsor. “We also found that it’s a tremendous opportunity for leadership for the employees that get involved. They might not yet be in a role where they’re leading people but through the employee resource groups they can get that experience of developing a plan, leading a team, identifying it and allocating resources to make that all come to life,” Esposito says.

Again, it’s a direct way for Wendy’s to create a herd people connect with. “We’re finding that some of our most promising talent within the organization is coming up through these employee resource groups. Couldn’t be more excited about those and what they’ve offered for this company,” she says.

On the flip side, it’s kept senior executive connected up and down the company ladder.

In 2021, Wendy’s set a goal to increase the representation of underrepresented populations among company leadership and management, as well as the diversity of its franchisees; to support that goal, Wendy’s will “focus attention on representation by ethnicity and gender by addressing what has been referred to as the ‘broken rung’ of leadership.”

The “broken rung” in this instance concerns the step of moving from restaurant manager to district manager. Essentially, Wendy’s believes it’s diversity passes the test up until that level. It then falls off.

Wendy’s said it wants to increase diverse representation by gender and ethnicity in management and leadership, from entry to senior level. It also wants to boost representation of franchisees who identify as female and persons of color.

Here’s a look at the present breakdown: