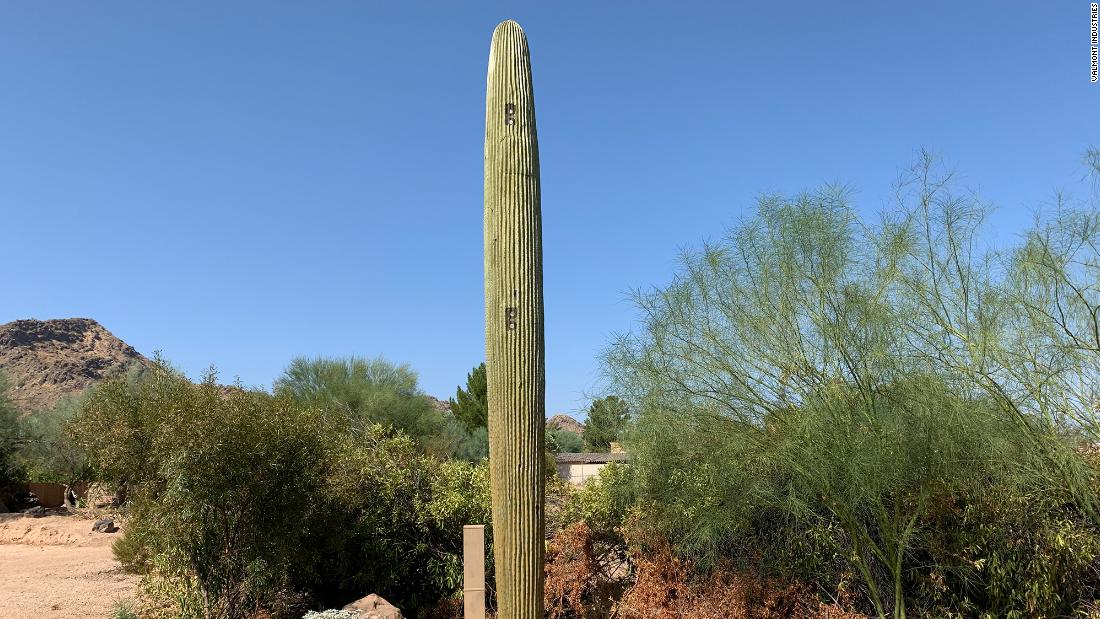 Across the United States, clunky 4G cell towers are often “disguised” with regionally-prominent foliage. Evergreens are attached to sites in the Northeast. In the South, they’re decorated to look like palm trees. And then there’s the cacti out West. In some cases, the equipment is tucked into existing church bell towers, town square signs and on the side of historic landmarks. On farmland, 4G-enabled water towers are set up as props to give the impression they’re part of the landscape.

But with the rollout of 5G, the next-generation of wireless speed, cities like Scottsdale will rely less on elaborate cover ups and more on a piece of architecture that’s been a mainstay in urban and suburban environments for well over a century: street lights.

It’s not as creative as hiding technology in a faux plant but the shift is currently playing out all over the world. “Design will be just as important moving forward with the 5G installations, but we will have a greater focus on streetlights than the cacti,” said Keith Niederer, telecom policy coordinator for Scottsdale.

That’s because 5G radio signals for small cell sites operate at a higher millimeter wave frequency than 4G, making them more easily blocked by objects, such as wooden fixtures or leaves, and certain materials. Consequently, installations must be set up every couple hundred feet — and that distance will shrink even more as data-needy technology like self-driving cars hit the roads. They also need to be close to street level for people to access the signals and the antennas, for the most part, must remain exposed.

All this is to say, you can’t quite put 5G in a pretty box. The technology needs to be out in the open — on main streets, residential roads and frankly, everywhere.

“In Scottsdale, aesthetics are pretty important. Every street has a different theme and streetlights vary,” added Niederer, noting the technical limitations. “We want them to blend in as much as possible and not stand out.”

With speeds nearly 30 times faster than 4G in the US, 5G promises to handle significantly more internet traffic and bandwidth with zero latency, allowing for immediate response times for data transfers. 4G made services like FaceTime or Uber a reality, but 5G intends to do even more, such as help self-driving cars process all the information they need to make life-or-death decisions in the blink of an eye or enable robotic surgeries. But in the short-term, 5G deployment presents an opportunity for the businesses that conceal the technology.

The wireless carriers in the Phoenix metro area, including Scottsdale, are working with Valmont Industries, one of the largest concealment companies in the world and the first maker of the camouflaged pine tree tower nearly 30 years ago in the Denver market, to ensure the colors, designs and use cases fit with neighborhoods. (Valmont just wrapped a similar project with the city of San Antonio, Texas, swapping its signature fluted poles with swooping arms for ones with a similar style but a stronger base and thicker steel to support the 5G equipment.)

“There’s no form factor we won’t consider using,” said Mark Schmidt, general manager of communication concealment at Valmont. “Our goal is to bridge the gap between the aesthetics in a community, what a jurisdiction would like to see and what the wireless carrier requires as a form factor. … But the most natural fit here will be traffic lights and street lights.”

Verizon (VZ), T-Mobile (TMUS) and AT&T (T), which owns CNN’s parent company WarnerMedia, are pouring billions of dollars into 5G. The new networks and associated technologies are expected to add $17 trillion to global economic growth by 2035, according to ABI Research, a tech market firm. Carriers continue to deploy their networks across the US despite some disruption due to the Covid-19 pandemic, such as overcoming engineering problems and installing new cell sites as workers maintain social distancing and city permitting offices were closed in the early days of the outbreak. However, tech companies such as Cisco say the pandemic has highlighted the need for 5G’s high-speed and high-bandwidth connections.

Swapping out older street lights for 5G-capable ones to support that growth may sound like relatively minor process, but doing so will serve as a big step for many communities to become smart cities.

According to Dean Tan, analyst at ABI Research, a lamp posts’ access to a power supply will make them an “integral part of any smart city project.” They can double as electric charging stations, security camera installations or feature LED displays for advertising. The Japanese government has been trialing this approach in Tokyo, where smart poles have public Wi-Fi, cameras, provide real-time traffic updates to help the local administration with city traffic management and have digital advertising and information boards.

Tan said there is a “growth opportunity” for concealment companies as they play a big role in the global rollout of 5G. “Other potential options [beyond smart poles] include bus stop displays, manhole covers and even traffic lights,” he said. However, street lamps are ideal as they have elevation and an existing source of power.”

Tom Kuklo, a global product manager for Radio Frequency Systems (RFS), which is already rolling out components for smart street lights in some international cities, agrees street lamps will soon become crucial communication hubs. “We’re already seeing this in China and some other locations where smart poles are very predominant,” he said. “They’re becoming part of the landscaping; you walk right past them and don’t even know that’s what’s giving you a 5G signal unless you’re looking for it.”

He said there’s an increasing interest in concealment for security reasons, too. Some groups in the UK have vandalized 5G streetlights, shooting them down or setting fire to them, over baseless fears about health risks and conspiracy theories that it’s linked to Covid-19.

“Concealment is absolutely the buzzword and what everyone is trying to do right now,” said Kuklo, noting the various reasons for deployment. “We have at least double of the interest in 5G that we did last year, but we are still rolling out 4G concealment. Not everyone in the world is in the same place when it comes to wireless connectivity.”