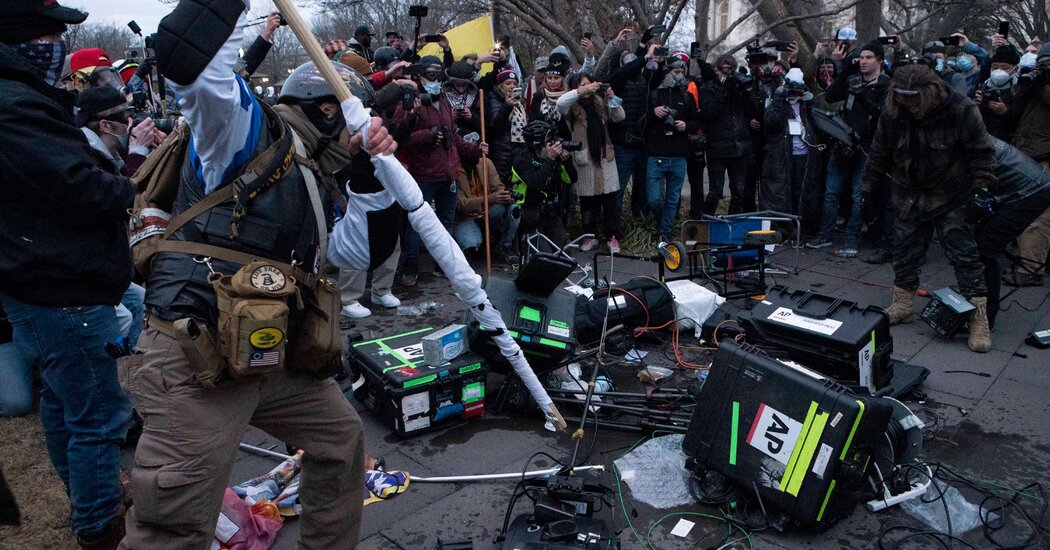 The MSNBC anchor Yasmin Vossoughian said on air outside the Capitol that she and her team had worn clothing unmarked by MSNBC or NBC insignia. “We knew there might be pushback, some hostility toward us,” she said, “because, as you well know, the president is continuously talking about the fake news media and telling people not to trust the media.”

Flanked by two security guards later in the day, she said she had had “real interesting engagements” with some protesters, despite being heckled with profanities by others.

President Trump and his allies have fanned the flames of anti-media sentiment, regularly labeling news outlets as “the enemy of the people.” On Wednesday, during an appearance on Fox News, the former vice-presidential candidate Sarah Palin described the events of the day as “mayhem,” adding that “a lot of it is the media’s fault.”

Joel Simon, executive director of the Committee to Protect Journalists, said in a statement Wednesday that journalists in Washington had been subject to intimidation while facing the possibility of escalating attacks. “Journalists and news crews covering these events, which are of paramount public interest, must be able to do so freely and safely, with the support and protection of law enforcement,” he said.

Zoeann Murphy, a video journalist with The Washington Post, posted on Twitter that she and a colleague had been detained by the police for filming protests outside the Capitol after the 6 p.m. curfew but had quickly been released.

Journalists who were covering the counting of the electoral votes inside the Capitol building sought shelter from the violent protesters who had smashed their way in. Haley Talbot, an NBC producer, took refuge in a congressional representative’s office with five other reporters. She called into MSNBC’s broadcast and described a “dire situation” earlier that had required her and others to grab gas masks while evading those pounding on the glass door of the House chamber.

The threats and attacks were not limited to Washington. The Canadian outlet CTV News reported that a Canadian Broadcasting Corporation photographer had been punched in the face while covering a small rally of Trump supporters in Vancouver, British Columbia. Sara Gentzler, a reporter with The Olympian in Washington State, wrote on Twitter that she and another journalist had been accosted at a protest in Olympia, Wash., by an armed man who told them that the news media were not welcome. He added that he had pepper-sprayed other reporters earlier and said he would kill her and other journalists “in the next year.”