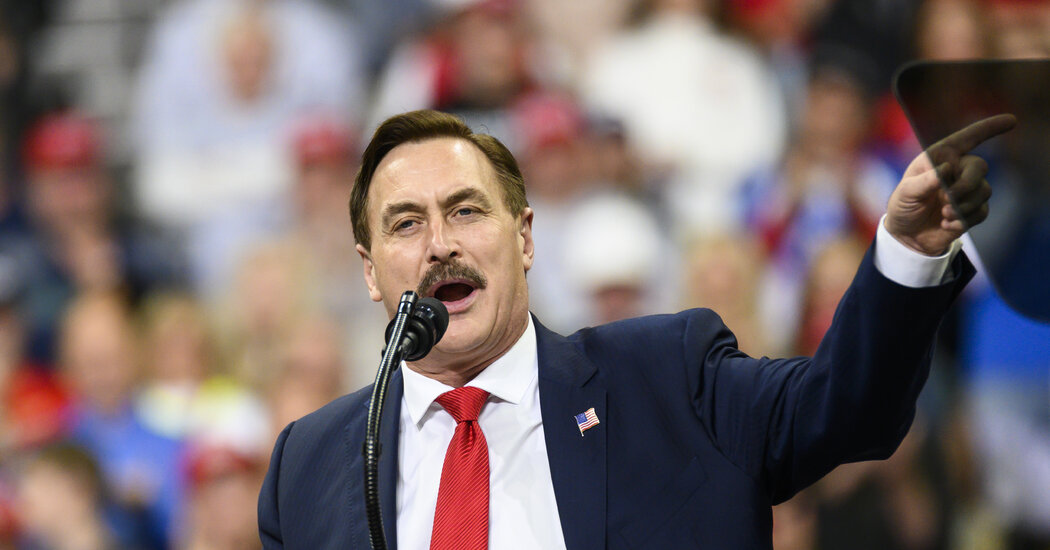 Days after the storming of the Capitol, many American companies, including AT&T, Dow, Airbnb and Morgan Stanley, tried to distance themselves from the political violence by announcing that they would stop giving money to the 147 Republican members of Congress who objected to certifying the election results on Jan. 6.

MyPillow, a bedding company run by Mike Lindell, a fervent supporter of President Trump, has taken a different approach.

On Tuesday, MyPillow was offering a discount code to its customers: “FightForTrump.” Online shoppers who type in the phrase can receive lower prices on the company’s “premium” pillow, “classic” pillow and other products.

The code was available on the day of the siege, when Mr. Lindell attended President Trump’s rally at the Ellipse before the mob moved toward the Capitol building. It is not clear if MyPillow’s “FightForTrump” code was valid before Wednesday.

Mr. Lindell continued to back the protesters in the hours after Mr. Trump’s violent supporters broke into the Capitol. Appearing on Wednesday as a guest on Newsmax, the right-wing cable network, Mr. Lindell described the events of the day as “very peaceful.”

“There was probably some undercover antifa that dressed as Trump people and did some damage to windows and got in there,” he added. The Federal Bureau of Investigation said there is “no indication” of any antifa involvement. In the same interview Mr. Lindell claimed that “Donald Trump will be our president for the next four years.”

MyPillow is a major supporter of conservative media. The brand appeared on 16 TV networks from Wednesday through Friday, with 44 percent of its spending going to Fox News, Fox Business and Fox Sports, according to data from MediaRadar. From the day of the Washington riots until Monday, MyPillow spent tens of thousands of ad dollars on Newsmax, according to estimates from iSpot.TV. In the first three quarters of 2020, MyPillow spent more than $62 million on television ads, nearly 99 percent of it going to cable channels such as Fox News, according to Nielsen Ad Intel.

Even as his company has advertised heavily on Fox News, Mr. Lindell has followed Mr. Trump’s lead in criticizing the network, which declared Joseph R. Biden Jr. the president-elect on Nov. 7. In a Jan. 5 Twitter post, Mr. Lindell said that Fox News “keeps suppressing the evidence and election fraud!”

In the days after the siege, Mr. Lindell promoted debunked conspiracy theories on social media, urging fans in a since-deleted tweet to “keep the faith as evidence of the biggest election fraud in history gets revealed.” He also complained that his follower count on Twitter was dropping as the platform cracked down on harmful content and removed users who expressed support for theories associated with the fringe movement QAnon.

In an interview recorded the day after the storming of the Capitol at the Trump International Hotel in Washington, Mr. Lindell sent mixed messages. He repeated the false claim that “antifa” was behind the violence and said that one day even President Trump’s detractors will say that he had won the 2020 election, while also acknowledging that his candidate would not return to office on Jan. 20.

On Sunday and Monday, Mr. Lindell posted two tweets promoting the false theory of a stolen election. Twitter flagged both, so that they could not be shared, “due to a risk of violence,” the company said in statements attached to the tweets.