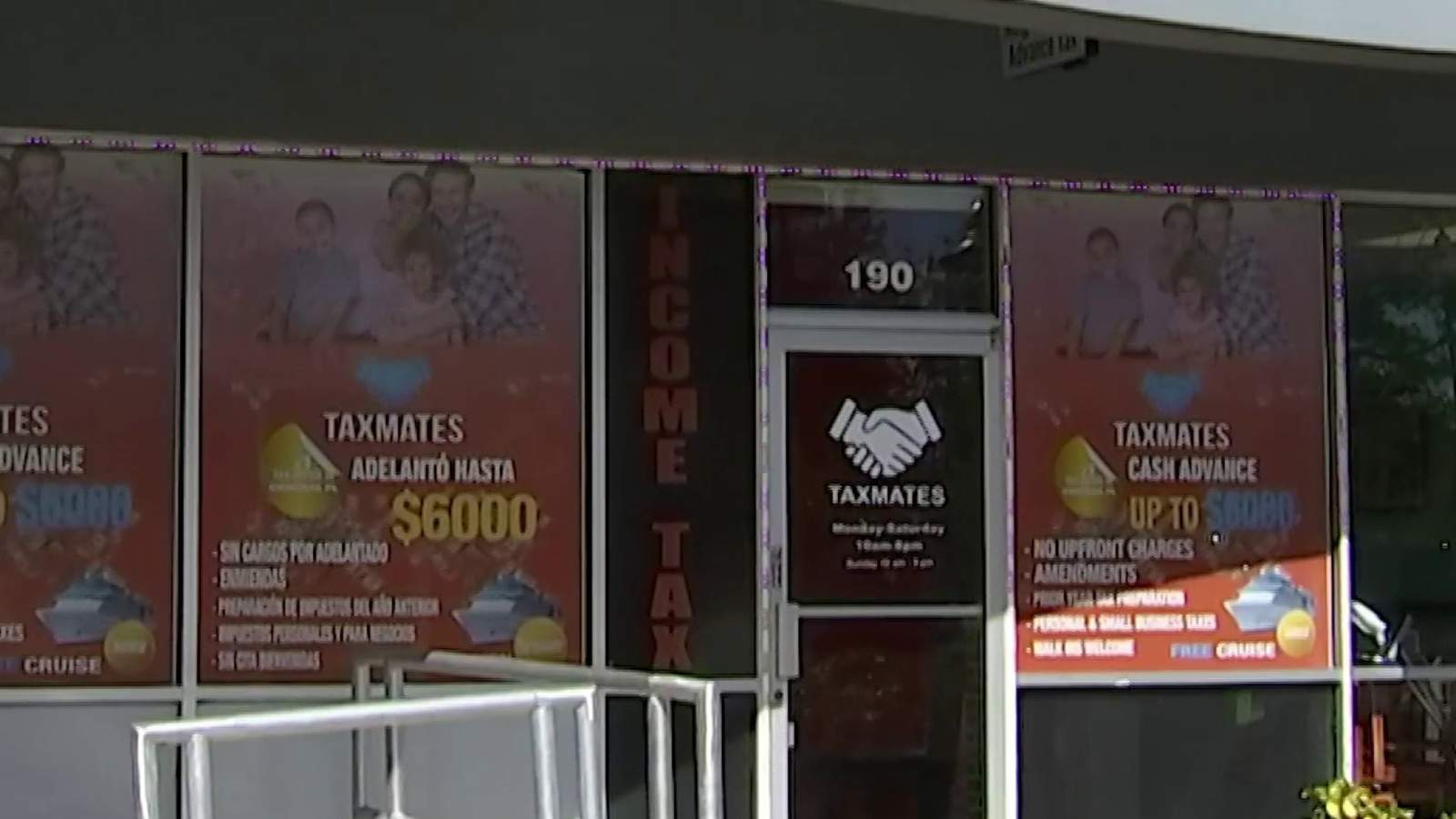 SANFORD, Fla. – Taxmates, a tax preparation business that promises to get filers the “highest refund in town” is facing eviction from one of its strip mall storefronts as its self-described owner has not responded to questions from News 6 about its operations.

Before closing sometime last year, Neighborhood Advance Tax was issued “D” and “F” ratings from the Better Business Bureau for failing to respond to more than two dozen customer complaints.

“I have nothing to do with Neighborhood Advance Tax,” said Onesto Rivera, 29, who identified himself as the owner of Taxmates. “I’m new to this industry.”

“I saw the potential,” Rivera said.

“Taxmates” was not registered as a fictitious name with Florida’s Division of Corporations at the time of this publication, and the state agency did not have any corporate records on file identifying Taxmates officers.

Likewise, there were no records on file with local government offices confirming Taxmates paid the required taxes to operate a business.

In eviction papers, a commercial property owner described Taxmates as being an “illegal occupant” that does not have a lease for a Sanford office previously occupied by Neighborhood Advance Tax.

At least some former employees of Neighborhood Advance Tax now work at Taxmates, News 6 has learned, including one tax preparer who filed an income tax return on behalf of a customer who was later audited by the IRS.

The website for Taxmates contains conflicting information about how long the company has been operating, while several quotes that purport to be customer testimonials praising the company can be found, word-for-word, on websites promoting other businesses around the world.

Following two brief phone conversations with News 6, Rivera has not responded to emailed questions about the company’s ownership, its employees’ qualifications, and its efforts to safeguard customers’ sensitive financial and personal information.

When Christina Gagliardy hired Neighborhood Advance Tax to prepare her 2019 tax return last year, she said an employee promised she would receive a tax refund of more than $2,000.

“I should have known better,” said Gagliardy. “I knew it was too good to be true.”

Months later, Gagliardy received a letter from the Internal Revenue Service informing her that her tax return was being audited and that she owed the federal government $627.

According to Gagliardy, her original tax return attempted to claim a deduction for a $13,000 charitable contribution she never made.

Gagliardy insists she did not tell the tax preparer to enter information about the donation and did not notice the error before her return was submitted to the IRS.

“I didn’t catch that,” she said. “You’re supposed to look at your tax documents and make sure it’s correct before you sign instead of just being extremely happy you’re getting money back.”

Anita McKim, another former Neighborhood Advance Tax customer, said she, too, was audited by the IRS after the government discovered improperly claimed charitable contributions on her tax return.

“I told (the tax preparer) I don’t have any deductions,” McKim said.

After News 6 published a report last year highlighting McKim’s complaints about Neighborhood Advance Tax, the company mailed her a check for $999, the fee she paid the company to prepare her taxes.

Other unhappy Neighborhood Advance Tax customers have not received similar refunds, including Gagliardy.

At least two dozen customers have filed complaints about Neighborhood Advance Tax with the Better Business Bureau, prompting the nonprofit consumer organization to issue the company its “D” and “F” ratings.

Late last year, Neighborhood Advance Tax went out of business, according to one of its former owners.

“(I’m) no longer associated with taxes,” Carter told News 6 in a text message.

News 6 was unable to identify owners or officers of Taxmates using public records on file with the Florida Division of Corporations.

Taxmates officers could also not be identified using local public records since Taxmates did not obtain business tax receipts, previously known as occupational licenses, required for it to operate in Volusia, Orange and Seminole counties.

The cities of Sanford and Orlando also did not have evidence that Taxmates paid the required business tax in those municipalities, officials said.

“I have a business license,” Rivera told News 6 in a brief phone call.

Rivera identified himself as the “sole owner” of all nine Taxmates locations in Central Florida.

In a video posted on the Facebook page for the Daytona Beach Taxmates office, Rivera tells prospective customers he is “one of the owners.”

Rivera did not respond to emails from News 6 inquiring about his Facebook video suggesting Taxmates may have multiple proprietors.

When a News 6 reporter called Taxmates offices in Sanford and Deland, employees who answered the phones said the company was owned by April Delacruz.

According to publicly available court records, Delacruz had an “intimate relationship” and shares a child with Franklin Carter, the former owner of Neighborhood Advance Tax.

Rivera told News 6 that Delacruz had “nothing to do with” Taxmates and did not work for the company.

On November 17, a public message posted on Delacruz’s Facebook page stated, “We are hiring!” with an image containing the Taxmates logo and listing the company’s Central Florida offices.

The following month, additional messages appeared on Delacruz’s Facebook page that read, “I am still hiring! My doors open January 4th!” and “I need more employees for Deland!”

Rivera did not respond to emails from News 6 inquiring about Delacruz’s Facebook posts that appeared to conflict with his claim that she was not associated with Taxmates.

One of the employees who told News 6 that Delacruz owned Taxmates was Isaiah Hayes.

Hayes prepared the tax return for Anita McKim that was later audited by the IRS.

“I was kind of leery when he was doing my taxes because he wasn’t asking me very many questions,” McKim said. “I specifically told him I don’t have any (charitable) contributions.”

McKim later discovered her tax return attempted to claim a deduction for $9,857 in charitable contributions.

A News 6 reporter later visited the Sanford office and spoke with Hayes, but the tax preparer stared at his phone without answering any questions.

On McKim’s tax return, Hayes indicated that he possessed a Preparer Tax Identification Number, or PTIN, that is required by federal law for anyone who is paid to prepare taxes.

An IRS database of PTIN holders updated in August 2020 does not show a listing for anyone in Florida named Isaiah Hayes.

Nearly 70 other tax preparers who identified Neighborhood Advance Tax as their employer are listed in the government’s PTIN database.

Rivera told News 6 he would investigate the status of Hayes’ PTIN but has not yet provided an update.

News 6 could not immediately reach Hayes by phone again to inquire about his PTIN.

The IRS was expected to update its PTIN database in February but had not yet done so at the time of this publication.

The owner of the strip mall that houses Taxmates’ Sanford office on Lake Mary Boulevard filed an eviction complaint Feb. 12 against Neighborhood Advance Tax and Taxmates.

Neighborhood Advance Tax failed to pay more than $6,700 in rent, according to the lawsuit.

The property owner describes Taxmates as an “illegal occupant” that “unlawfully entered the premises without a legal right and without a lease agreement or consent of the landlord.”

Rivera and Carter did not respond to inquiries from News 6 about the landlord’s allegations, and neither company has responded to the eviction complaint in court.

Although Rivera indicated he opened Taxmates shortly after he “bought out” Neighborhood Advance Tax last year, the official website for Taxmates might give prospective customers the impression that the company has been around much longer.

“For almost six years now, we have been helping our clients with their tax issues,” the Taxmates website states.

Another part of the Taxmates website contains quotes, purported to be customer testimonials, that suggest the company has been around for at least 17 years.

“They have been managing my tax issues since 2004,” a customer identified as artist Olivia Bangle allegedly said. “They are always friendly, reliable and professional.”

News 6 discovered that exact same customer quote, attributed to a different artist named Michaela Doug, on a website for an accounting firm based near Chicago.

On Taxmates’ website, a customer with a similar name, Michael Doug, is quoted as saying, “A first class service for small and big businesses. These guys know exactly what they do.”

That identical quote also appears on the Chicago accounting firm’s website, but is attributed to actor Adrien Brody.

The Taxmates website contains a different quote from Adrien Brody, but he is identified as a “radio personality.”

Similar customer testimonials can be found on other business websites around the world, including a property management company located in the United Kingdom.

Rivera did not respond to emails inquiring about the customer testimonials appearing on the Taxmates website, and a representative from the Chicago-based accounting firm did not immediately respond to a call from News 6.

The IRS offers advice on its website for choosing a qualified tax preparer.

The agency also warns against so-called “ghost” preparers who do not sign tax returns or fail to include a PTIN.

If a tax preparer attempts to generate a larger refund by creating false exemptions or omitting income, the IRS encourages taxpayers to file a complaint.

Gagliardy also has a suggestion for people like her who might hire someone to prepare their tax returns.

“Look it over with a fine-tooth comb before you sign it,” she said. “Because the bottom line, it’s your responsibility as a taxpayer to make sure it’s done correctly.”