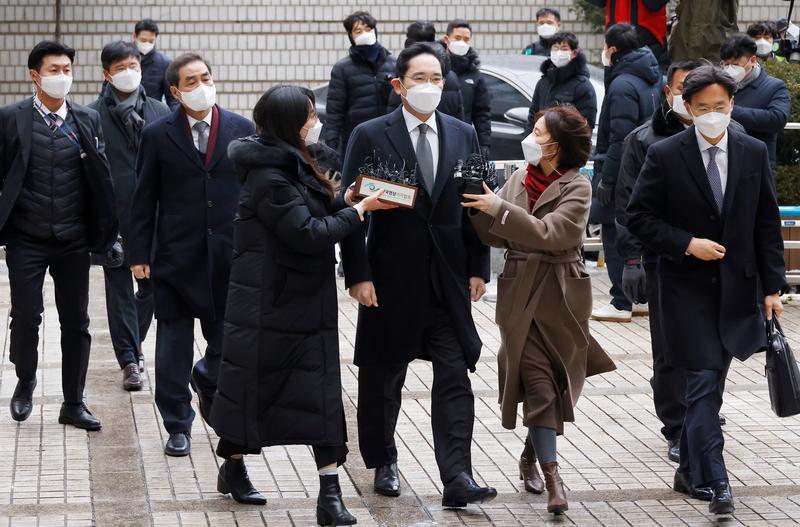 (Reuters) – Samsung Electronics Co Ltd Vice Chairman Jay Y. Lee was sentenced to two-and-a-half years in prison for bribing an associate of a former President Park Geun-hyeto win backing for a merger of two affiliates to strengthen his grip on the group.

Following are reactions to the sentence on Monday.

BAE SANG-KUN, EXECUTIVE DIRECTOR OF THE FEDERATION OF KOREAN INDUSTRIES

“We deeply regret (the court’s) decision as Vice Chairman Jay Y. Lee has been helping sustain the South Korean economy with his bold investment and job creation amid the economic crisis caused by the coronavirus pandemic.”

“The lack of management leadership could delay decision making processes to initiate new businesses, potentially resulting in being left behind in global competition. We hope that Samsung will wisely overcome this crisis and move forward with continuous growth.

KOREA ENTERPRISES FEDERATION IN A STATEMENT

“The business management community is gravely concerned about a leadership vacuum at Samsung Group due to the ruling that sentenced him with a jail term.”

“With unprecedented economic uncertainty caused by COVID-19 as well as the acceleration of protectionist policies around the globe, negative impacts on the overall economy and industries would be inevitable as delays of significant business decisions and investment are expected due to the lack of management leadership at one of the global companies in the country.”

“Although the court’s decision sent Lee back to prison, the decision still seems to be too lenient when it comes to the country’s conglomerate … today’s verdict will not help correct the track record of country’s courts offering leniency toward business tycoons.”

“Many are concerned that Samsung would face challenges as there is no owner in the management; however, Samsung managed to operate just fine when Lee was jailed last time.”

“The share price of Samsung Electronics has risen quite sharply recently, and a major difference from the past is that the share held by retail investors has increased greatly … Retail investors appear to be reacting sensitively to the ruling. When you look at message boards recently, opinions on Vice Chairman Lee (of retail investors) have been fairly positive.”