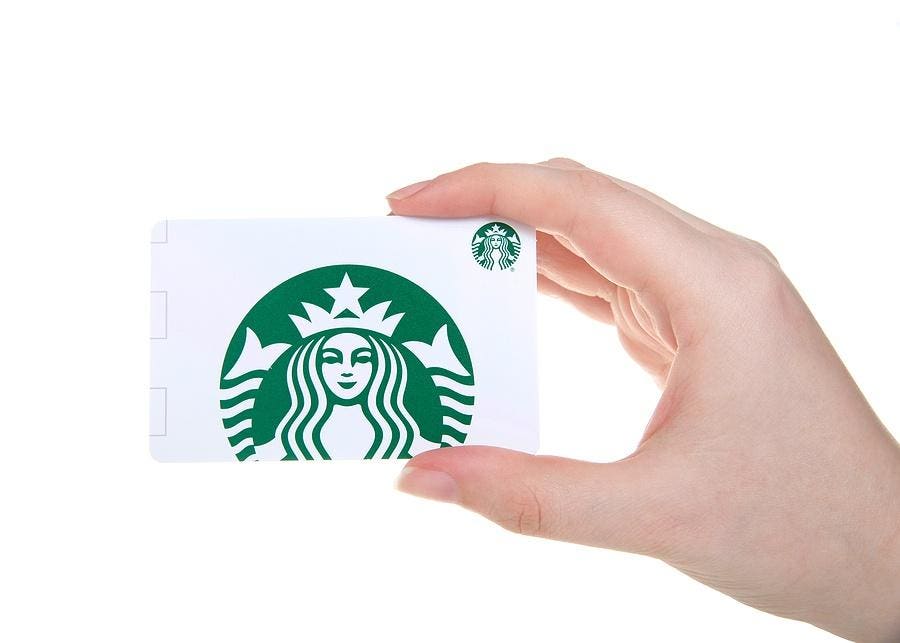 Starbucks customers have accumulated a total unspent balance of $1.628 billion on the company’s prepaid physical and digital reward and gift cards. The company lists the total value its customers have stored on their prepaid cards but have not yet spent as ‘stored value card liability and portion of deferred revenue’ on its consolidated balance sheet. The figure for Q3 2021 shows an increase of nearly $200 million in unspent stored value compared with the total of $1.463 billion listed for Q3 2020. [NFC World]

Chase has revamped yet another of its flagship credit cards: Chase Slate. The new Chase Slate Edge credit card offers an introductory 0% APR promotion for 12 months on purchases and balance transfers. The card now charges a 3% transfer fee for the first 60 days, then a 5% fee after that. Once the introductory 0% APR promotion ends, the variable APR ranges from 14.99% to 23.74%. If you pay your bill on time every month and spend at least $1,000 per year, you may be able to get your APR reduced by as much as 2%. The card offers a $100 bonus when you spend $500 on it in the first six months, but there’s no ongoing rewards program. [Investopedia]

Credit card companies no longer have a spending problem. They’ve still got a borrowing problem. In recent months, many U.S. consumers were spending at levels similar to, or better than, what they were doing in the same period in the year before the pandemic began. Consumers are also paying off their cards rather than building balances that generate interest payments. But an extended period of benign credit, big spending and no borrowing could generate new problems. Notably, it could encourage a lot of competition, and spenders tend to be very focused on rewards. Without the discipline of credit risk, there is pressure and a temptation to just keep adding more and more spenders. That can backfire if the consumers who are most at risk of financial trouble in the future are the ones who are tearing open their mail to accept generous card offers. [The Wall Street Journal]

The Owners Rewards Card by M1 is (potentially) a no-annual-fee credit card where you can earn up to 10% cash back by spending with the brands you have an investment in through M1 Finance, including Amazon, Target, Starbucks, Delta Air Lines, Tesla and Netflix. More companies are planning on being added to the list, based on the most popular investments among M1 users. [CNBC]

Mastercard Seeks to Ease Use of Cryptocurrencies for Consumers

Mastercard is looking to make it easier for consumers to buy, spend and hold cryptocurrencies. Startups focused on crypto and digital assets will now be able to join Mastercard’s Start Path program, which gives fledgling companies access to the network’s executives and technology to help them grow. [Bloomberg]

Amex added welcome bonuses for two of its small business credit cards that previously did not offer signup perks. Blue Business Plus cardholders can earn 15,000 membership rewards points when they spend $3,000 in eligible purchases in the first three months of card membership. Blue Business Cash cardholders are eligible for $250 in statement credits when they spend $3,000 in purchases in the first three months of obtaining the card. Both cards also offer 0% introductory APR on purchases for the first 12 months after opening an account. Amex’s welcome bonuses could push small businesses toward credit cards, which overall were the second-most-popular financing product tool sought by small businesses last October. [Business Insider]

Mastercard topped expectations with its second-quarter results amid a continued recovery in spending trends. Mastercard’s revenue increased to $4.53 billion from $3.34 billion, while analysts were modeling $4.37 billion. The company pointed to a continued spending recovery both domestically and in the cross-border category. Visa posted its own results, showing improvements in spending categories like travel and entertainment but more room for recovery in the cross-border category. [MarketWatch]

The CFPB has published an issue brief showing that consumer applications for new mortgages, auto loans and revolving credit cards had mostly returned to pre-pandemic levels by May 2021. Prime and near-prime consumers are driving this recovery as applications remain down from borrowers with subprime and deep subprime for all types of credit and, for borrowers with superprime credit scores, applications are down for all types of credit but mortgages. [Mortgage ORB]

Apple Pay Now Offered for eBay Purchases Made on Desktop

Yet another major retailer has added support for Apple Pay on their desktop site. Those visiting eBay can now use Apple Pay to check out when using Safari. Support for Apple Pay has already existed in eBay’s mobile apps for a significant period of time, but the move to support Apple Pay on desktop seems to be new. Users who use their Apple Card for eBay purchases will receive 2% cashback as part of the Apple Card rewards program. [Apple Insider]

Cybersecurity in 2021: 4 Trends to Watch in the Second Half

One of the great unknowns for the second half of 2021 is the possibility of large portions of the workforce returning to offices in either a full-time or part-time capacity starting after Labor Day. For over a year, work-from-home has expanded the attack surface, and lax security practices and lack of training and resources to protect home networks means that these issues might follow employees back to corporate offices. In many cases, hackers might be willing to wait weeks or even months to begin an attack, which means corporate security might appear steady at first—but this could mean a lull as threat actors map the network and plan for the next step. [Dice]