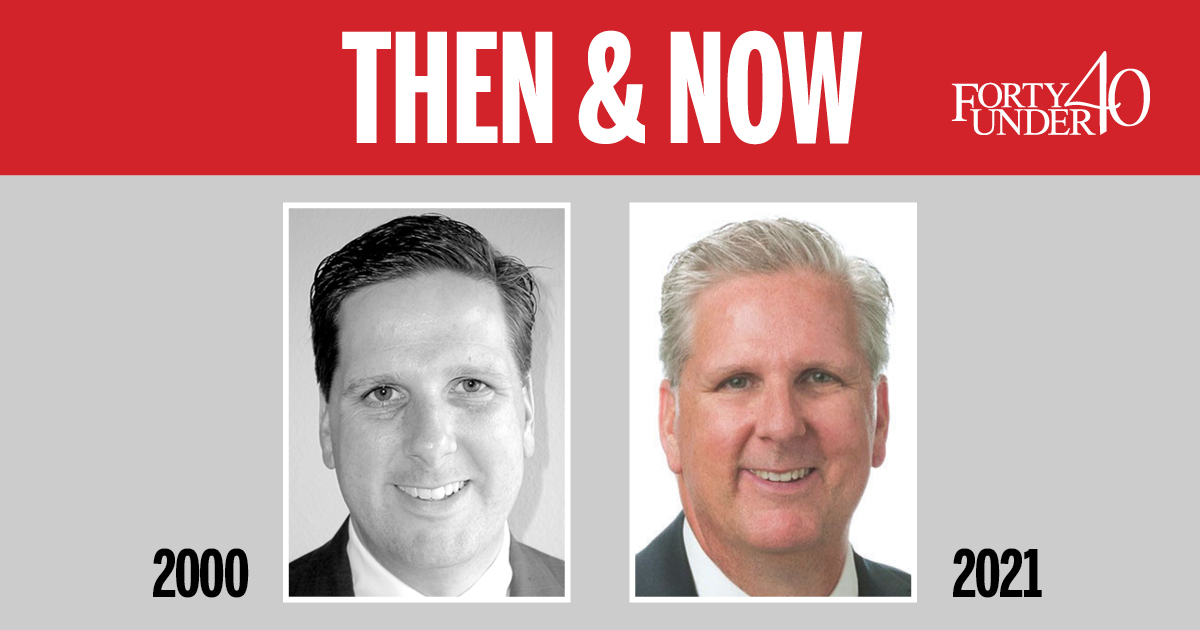 Editor’s Note: The following story appeared in the Sept. 13 issue of the Northwest Arkansas Business Journal. “Then & Now” is a profile of a past member of the Business Journal’s Forty Under 40 class.

The backbone of commercial lending is working with customers to expand existing relationships and develop new ones. But mentoring the next generation of bankers is also considered essential.

The opportunity to do that brought longtime Fayetteville banker Craig Shy to Arvest Bank 17 years ago this month, and he still enjoys that work today.

In September 2004, Shy moved from Bank of Arkansas to Arvest, which began innocently enough with a fundraising call for the Northside Fayetteville Rotary Club to support Rotary International’s “Every Rotarian, Every Year” program.

“I was president of Northside Rotary at the time,” Shy recalled during a recent interview. “I dialed up Payne Brewer, who was Arvest’s loan manager in Fayetteville and also a longtime friend. When he answered, he asked me if I wanted a job. After giving him my sales pitch [for Rotary], he returned to that and said he was serious.

“I asked him what he had in mind.”

Brewer explained to Shy a job opportunity to lead a small team of commercial bankers in Arvest’s Fayetteville market, something he hadn’t done before.

A 1985 graduate of Jenks High School in Jenks, Okla., Shy graduated in 1989 from the University of Arkansas with a bachelor’s degree in banking and finance. He immediately went to work as a credit analyst for The Merchants Bank in Kansas City, Mo.

That began Shy’s upwardly mobile career in the Kansas City metro. He worked for multiple banks for several years until returning to Fayetteville in October 1996 as a commercial banker for Bank of Arkansas N.A. He worked there for seven years, and the Northwest Arkansas Business Journal honored him as a member of its annual Forty Under 40 class in 2000.

He said the opportunity to manage and mentor a small group of commercial lenders at Arvest was hard to dismiss.

“It intrigued me,” Shy said. “When I looked back at my career in Kansas City and Bank of Arkansas, I thought back to the people who had poured into me and shared their wisdom and knowledge. That was something I wanted to do for others. Bank of Arkansas was a great place but was a smaller operation [than Arvest] in Northwest Arkansas. There weren’t a lot of management mentoring opportunities there. Just generate business and take care of customers.

“Collaboration and mentorship are a big part of what I enjoy, so I’m happy I made a move [to Arvest].”

Shy worked as an area loan manager for Arvest for seven years. The company promoted him to commercial banking manager in 2011. Two years later, he earned another promotion to executive vice president and Fayetteville loan manager. He oversees the bank’s Fayetteville market lending functions, including commercial, private and mortgage lending. Those departments include about 60 employees.

Although all Arvest branches are technically part of the same Fayetteville charter, the company currently maintains 16 different community bank markets in Arkansas, Missouri, Kansas and Oklahoma, each with an executive team and advisory board. Shy is one of three executive officers of the Fayetteville market and guides the overall direction of the bank as a member of the senior coaches team.

“One thing I think helps a commercial banker is a little bit of patience,” Shy said of his best advice for beginning bankers. “Invest in themselves and learn as much as they possibly can each day.”

Shy, 54, is a 2009 graduate of the Southwest Graduate School of Banking at Southern Methodist University. He also has an extensive history of community service throughout Fayetteville, including leadership positions with Northside Rotary, Walton Arts Center Foundation, Fayetteville Chamber of Commerce and Fayetteville Public Education Foundation.

His most significant community work is with Life Styles Inc., a nonprofit that provides services to adults with developmental disabilities. He’s chairman of the board and has been involved with the group since 2007.

Shy also promotes advocacy and public awareness of Down syndrome at the state and national levels. He and his wife, April, have four children, and the two youngest are 15-year-old twins: Austin, who has Down syndrome, and Audrey.