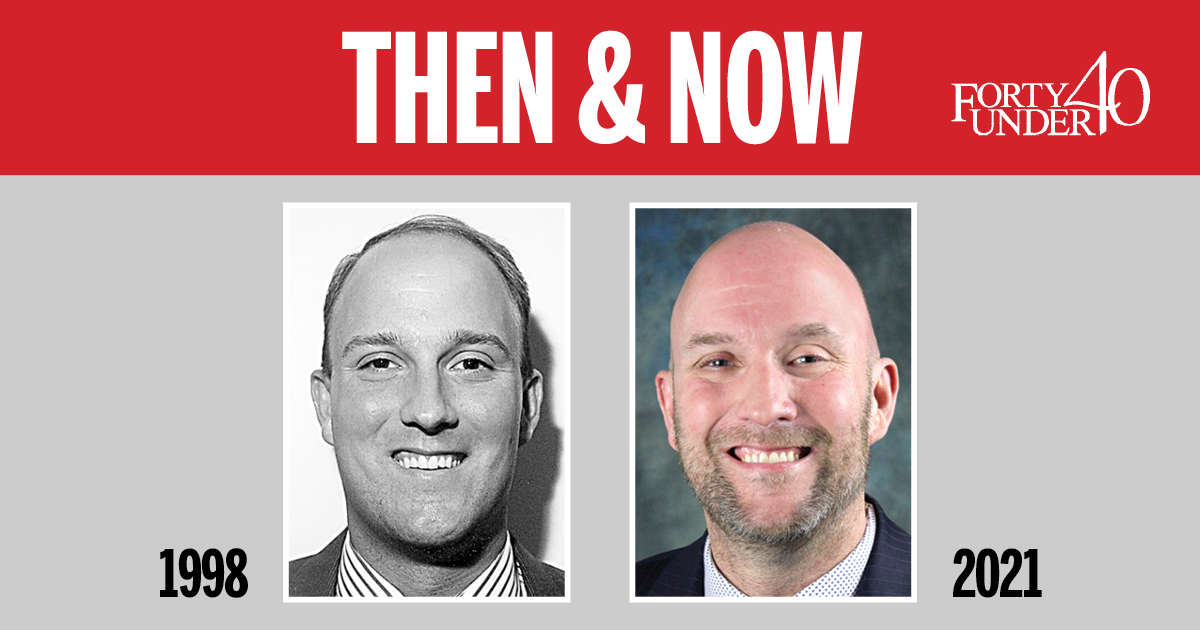 Editor’s Note: The following story appeared in the March 15 issue of the Northwest Arkansas Business Journal. “Then & Now” is a profile of a past member of the Business Journal’s Forty Under 40 class.

It’s always nice to treat others the way you want them to treat you.

That’s Phil Whitehead’s deep-seated philosophy. He gives credit to his parents — Guendaline “Gen” Whitehead Broyles and the late Jim Whitehead — and applies the mindset to his daily work as a successful bank executive in Fayetteville, a career that’s creeping close to three decades.

To underscore the attitude, Whitehead recalled in a recent interview a conversation with his then 7-year-old son while going through the drive-thru at a Braum’s restaurant in Fayetteville.

“Dad, why are you so friendly to the drive-up people?” asked Rayner Whitehead, who is now 21.

“Rayner, you never know what kind of day someone is having or what they are dealing with. I don’t want to be another reason they might be having a bad day.”

Whitehead, 53, an affable and good-humored banker, almost to a fault, is a senior vice president of corporate banking at BOK Financial in Fayetteville. BOK is an acronym for Bank of Oklahoma. It’s the banking subsidiary of BOK Financial Corp. (BOKF), a holding company headquartered in the BOK Tower in Tulsa, Okla., with more than $90 billion in assets under management and administration.

Whitehead has spent his entire banking career working in his hometown. In 1993, he went to work as a credit analyst for what was then called Worthen Bank. Through acquisitions, it subsequently became Boatmen’s Bancshares Inc., then national giant NationsBank Corp.

Whitehead became a commercial lender for the bank in 1995. The Northwest Arkansas Business Journal named him to its Forty Under 40 class in 1998.

Later that year, NationsBank and BankAmerica Corp. merged to create the largest bank in the U.S. It took the name known today as Bank of America (BofA). Whitehead remained there after the merger and worked for BofA for nearly 15 years.

“They were good to me,” he said. “I had an excellent boss [Wilson Moore] in Little Rock who took good care of me. Being a banker in Northwest Arkansas, you get a lot of phone calls from other banks about jobs. I always felt good working there.”

Ultimately, in 2012, Whitehead said speculation about layoffs in the BofA organization was growing. The rumors affected Whitehead, who’d worked in the same building on the downtown Fayetteville square for almost 20 years.

“I thought it would be easier to find a [different] job when you already had one,” he remembered.

Whitehead found the right opportunity at Bank of Arkansas (BOK Financial’s business name in Arkansas until 2019) in Fayetteville. Jacob Hudson, a former BofA colleague, had joined the bank a few months earlier and gave high marks to both the company and its Arkansas market president, Jett Cato.

Cato retired in April 2020 after 24 years with the company and 37 years in the banking industry. Hudson replaced him as the company’s Arkansas market leader.

“Jacob is a great leader,” Whitehead said. “He isn’t one to look over your shoulder all the time and is a great resource when you need him. He is young and is pro-business but also a brilliant credit mind. He makes sure we’re smart about our loans.”

Whitehead said meeting new clients, finding out about their businesses and helping them grow and create jobs is the most enjoyable aspect of his career.

Whitehead said his family also brings him tremendous happiness. He has a son and daughter (Henley, 17) from a previous marriage, and he has six brothers and sisters, including an identical twin brother. They are two-thirds of a set of triplets, along with a fraternal sister.

There are many educators in the family tree, Whitehead said, most notably his late father. Jim Whitehead, who died suddenly in 2003 at 67, co-founded the University of Arkansas’ creative writing department in 1965 and was a renowned author and professor.

Phil Whitehead’s connection in that domain is through the Junior Achievement of Arkansas. He teaches classes in Fayetteville for the nonprofit to foster work-readiness, entrepreneurship and financial literacy skills and is a past board member.