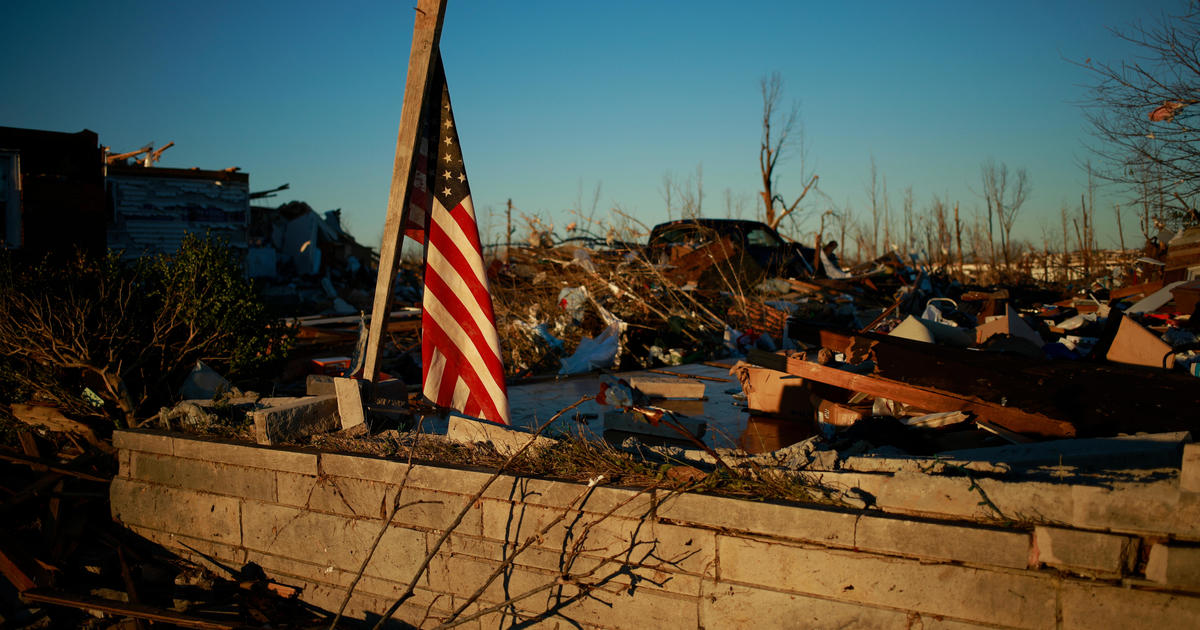 The cluster of deadly storms that slammed the U.S. last weekend is the latest sign that tornado activity has waned in the Great Plains — historically known as “Tornado Alley” — while picking up in the southeastern U.S., a manufacturing-rich region that is increasingly critical to the nation’s supply chain.

“We’ve seen a shift, really — a decrease in the frequency in the Great Plains, which still gets a lot of tornadoes, but an increasing trend in places like Kentucky and Tennessee, Arkansas, Missouri and portions of the Midwest,” Victor Gensini, an associate professor and leading researcher on severe weather, told CBSN. “And this is obviously a big deal for vulnerability.”

It may take weeks before the final death toll from the tornadoes will be known. More than 70 deaths have been confirmed and dozens of people remain unaccounted for, Kentucky’s governor said Monday. The severe weather and tornadoes affected seven other states, killing at least 12 additional people.

At least two of the most prominent casualties over the weekend were a massive Amazon distribution center in Edwardsville, Illinois, that serves the region’s businesses and consumers and a candle factory in Mayfield, Kentucky, where more than 100 people were working the night shift when the tornadoes struck.

Such businesses are a bulwark of local economies across the region, which raises the risks for many communities and employees faced with ever more extreme weather.

The storms are likely to cost at least $18 billion, according to a preliminary estimate for total damage and economic losses from Accuweather. The disaster is the latest in a year of severe weather events exacerbated by climate change. Some 18 disasters with losses exceeding $1 billion each hit the U.S. through October, according to the National Oceanic and Atmospheric Administration.

“We have seen in the last couple of decades an eastward shift away from the traditional Tornado Alley areas [and] more in the Mississippi Valley in the Midwest, other parts of the Southeast plains,” Steven Bowen, managing director for catastrophe insight for insurer Aon, said this week. “That’s leading to higher costs, especially in areas where we do see a lot of these manufacturing facilities and a lot of the central portions of much of the supply chain that is really critical.”

“So as we start to see more shifts, we do have to start taking a step back and recognize how we’re assessing risk,” said Bowen, who is a former meteorologist.

Of the $135 billion in U.S. economic losses from extreme weather through November, roughly $30 billion is tied to severe storms like tornadoes, thunderstorms and destructive winds, defined as those resulting from warm, moist air rising from the earth. Insured losses from such storms stood at $21 billion, meaning the rest wasn’t covered, according to Aon estimates.

This week’s catastrophe comes amid two trends in a region that stretches from southern Illinois to Arkansas to western Georgia connected by the interstate highway system: a growing manufacturing base that includes an increasing number of auto assembly plants, and a strain on the nationwide supply chain as the country rebounds from the global economic shock caused by COVID-19.

The region including Kentucky, Tennessee, Mississippi and Alabama accounted for the second-highest concentration of manufacturing employees in the nation in 2015 as workers lured from the Northeast and Midwest moved over decades, according to a recent analysis from the Urban Institute. More plants are coming: In September, Ford announced a new Tennessee complex where it will build electric F-series trucks as well as new battery plants in Kentucky.

The region is also a vital hub for shipping and logistics. FedEx’s main facility is in Memphis, Tennessee, home to the busiest air cargo port in North America and roughly 50 miles away from where one of the tornadoes touched down. UPS’s headquarters is further away in Louisville, Kentucky. Both are strategically near major interstate highways in a nation where trucks move roughly 75% of freight.

FedEx’s contingency plan of shifting operation centers outside Memphis limited service interruptions, according to the company. “[W]e appreciate our customers’ patience and understanding as we work to clear the remaining backlog,” a spokeswoman said in an email to CBS MoneyWatch.

Memphis-based International Paper, a big maker of corrugated cardboard used for shipping boxes wasn’t impacted by the storms, a spokeswoman said. The company also has plants in states hit by last weekend’s fierce storms, including Arkansas and Kentucky.

Tornadoes tend to be more destructive and unpredictable than other extreme weather events, especially if they occur at night, according to a study conducted by the National Institute for Risk and Resilience as well as the Storm Prediction Center.  An overnight tornado is more than twice as likely to result in fatalities than one that happens during the day, the researchers note.

What’s more, because the area is more populous than the traditional Great Plains region where tornadoes land, the destruction is more costly — both to humans and property, experts said.

After these latest tornadoes, businesses in the affected areas will likely look at where to rebuild to reduce risks and how to retrofit buildings to make them more resilient, Klosowski said. For instance, a company might locate some facilities underground or reinforce buildings for high-wind damage in tornado-prone areas.

Tornadoes can be harder to protect against versus reinforcing for floods or hurricanes in part because of unpredictability, extreme wind speeds and how they manifest, she said.

Key to what happens next in the region may be how well FEMA and the federal government help in the rebuilding process, said disaster relief expert Mary Long, managing director of the Global Supply Chain Institute’s Supply Chain Forum at the University of Tennessee, Knoxville’s Haslam College of Business.

President Joe Biden, who will visit Kentucky on Wednesday, approved a disaster declaration December 12. That allows federal aid to flow to the state to supplement its recovery efforts. He said his administration is “going to be there as long as it takes to help.”

Companies already in the region are unlikely to move out of the area to mitigate risk, Long predicted. That’s because firms chose the area “from an economic standpoint in servicing the U.S. population, and the infrastructure that’s available.” If the federal, state and local governments don’t execute the recovery well, that’s when firms may chose to relocate.

“They’re under a lot of pressure, obviously, but also, this is what they do. They’re trained to do this. It’s not their first rodeo,” Long said.

“The pandemic has honed the skills in collaboration. Some states and local governments have worked that more adeptly. Others are still working it out. We all intend to have it be a good thing,” she said. “We don’t intentionally want to harm people. In my space of disaster relief, we are seeking to reduce suffering and save lives. That’s the ultimate goal.”