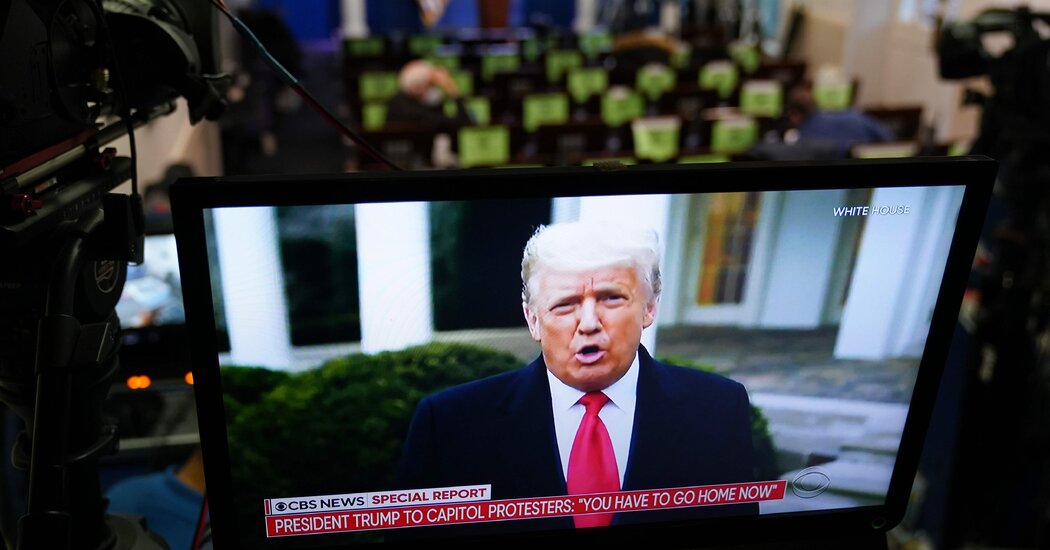 On his Wednesday program, Tucker Carlson called the day’s violence “wrong” and said that American citizens “are inseparably intertwined.” He did not mention Mr. Trump by name in his opening monologue, and he warned that Democrats’ taking power in Washington might strip away Americans’ freedoms in reaction to Wednesday’s events.

He concluded by saying that those who showed no understanding of the concerns of the people who stormed the Capitol were foolish. “We got to this sad, chaotic day for a reason,” he said. “It is not your fault. It is their fault.”

Right-wing personalities, who have helped fuel a movement built on misinformation and conspiracy theories, were reluctant to blame Mr. Trump for the violent actions of his supporters. On Newsmax, a conservative network that caters to Trump partisans — and whose most popular host, Greg Kelly, has insisted without basis that Mr. Trump can still win the election — commentators tried to denounce the mainstream media instead.

On Wednesday, Mr. Kelly echoed other Trump allies, including the Fox News star Laura Ingraham, in spreading a baseless rumor that far-left protesters were at fault for the actions of the pro-Trump mob. The notion that Trump supporters were blameless also cropped up on Mr. Carlson’s show, when a guest, Drew Hernandez, said that “antifa insurrectionists possibly could have infiltrated some of these movements.” Another Fox News personality, Brit Hume, wrote on Twitter, “Do not be surprised if we learn in the days ahead that the Trump rioters were infiltrated by leftist extremists.”

Earlier on Wednesday, Fox News and Newsmax, along with Fox Business, broadcast Mr. Trump’s incendiary, falsehood-laden speech in full, including when he urged his supporters to march down Pennsylvania Avenue. (The other cable news networks did not air the president’s speech.) After the Capitol rampage, on Newsmax, Bernard Kerik, a former New York City police commissioner and felon who was pardoned by Mr. Trump, asserted that journalists “are acting like it was an armed takeover of the Capitol and that’s nonsense.”

He added, despite ample footage of the riot, that “you have six to 10 people who entered the building. OK, deal with it.”

In tranquil times, the congressional certification of the Electoral College vote is the sort of rudimentary government business typically relegated to C-SPAN. Even before the mob headed to the Capitol, the networks were prepared for a marathon day of minute-by-minute Washington coverage, as allies of President Trump in the House and Senate planned a last-ditch effort to subvert the results of the election.