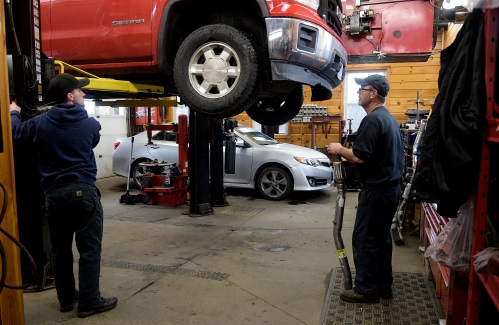 When Brent Murray was a Lebanon paramedic, he frequently dealt with people in crisis and urgent need of help. He says that training is a good background for his newest venture.

Murray and his wife and business partner, Cinnamon Murray, have completed back-to-back acquisitions of Bob’s Service Center in White River Junction and Grizzaffi’s Towing & Recovery in Lebanon. That puts the Murrays in command of a fleet of a dozen AAA-contracted tow trucks, making them one of the largest tow operations in the Upper Valley.

And also thrusts Brent Murray back into the rescue business.

“There are a lot of similarities between working as a paramedic and aiding motorists,” he noted. “Emergency roadside assistance is very close to the look and feel of being an EMT. You never know what you are going to find when you respond to a call,” adding that both involve “helping people in need.”

The Murrays are probably best known as the couple who took over Lebanon’s beloved soft-serve ice cream stand Dairy Twirl in 2013, a favored photo-op for politicians on the campaign trail. Until 2018, they also owned a string of Verizon phone stores in New Hampshire and Vermont, which were sold to Amcomm Wireless.

Brent Murray said he actually began talking with William “Billy” Grizzaffi, the late owner of Grizzaffi’s Towing, a couple years ago, before Grizzaffi was struck by a train and killed in Maine last October. At the same time he was in talks with Grizzaffi, Murray said they were contacted by their business broker and informed that Bob Perkins, owner of Bob’s Service Center, was retiring and wanted to sell his business.

“We could create synergy by having towing on both sides of the river, two locations,” Murray explained.

Perkins is helping the Murrays with the transition but otherwise said he is looking forward to life in lower gear.

“I’ll be helping out as best I can for a while, a few hours a day until golf season starts,” Perkins said via email last week. “It will be 34 years in two weeks that I’ve been here, 11 years in a management position and then almost 23 as owner. Looking forward to maybe a little slower pace and a little more free time.”

(The parties declined to discuss terms of the transaction for the business but Hartford real estate records show Perkins sold the service center real estate to the Murrays in February for $1 million).

Murray said that on the surface there might not seem to be much in common with phone stores, ice cream and towing. But in fact each of the businesses are grounded in the community and have customer service at the core, two criteria that are key for the Murrays.

“It’s just the two of us that are behind everything we do,” Murray said, explaining their business philosophy is “everyone is treated fairly and with respect. Local ownership is important.”

Erika Hoffman-Kiess, who for the past year has been working with Vital Communities in the vital economy program, is the new executive director of Green Mountain Economic Development Corp., taking over from Bob Haynes, who is retiring after five years as head of the regional development agency and a nearly five-decade career in commercial development in the Upper Valley and Vermont.

“It’s pretty big news in my life,” Haynes said, noting that he will continue “part time” to assist the White River Junction-based GMEDC on behalf of three projects he helped launch, including a new child care center in Randolph, remediation of a brownfield site in Bethel and a solar landfill project in Thetford. “I’ll be busy on some days, and other days I’ll be mowing and rowing.”

Haynes, who rowed at Dartmouth and stayed in the Upper Valley after he graduated in 1973, estimates he worked with some 200 businesses in the 30-town GMEDC district with site acquisition, feasibility studies, securing government and private financing and job training since he took over from Joan Goldstein in 2015.

“I’ve enjoyed it immensely and met a lot of folks, but it’s time for me to move on,” Haynes said.

There was no shortage of candidates to find his successor — 24 applications, seven interviews (via Zoom), two finalists and then “a unanimous by the board to go with Erika,” Haynes said.

Hoffman-Kiess, a Vermont native, had spent more than a decade working in Cambodia, Bangladesh and Pakistan in the international aid sector before returning to her home state to open her own consulting firm specializing in economic and workforce development in 2010. At Vital Communities, she helped assemble a study showing how shopping local helps to boost the Upper Valley economy as well coordinate pandemic-related information for local businesses.

Among Hoffman-Kiess’ priorities at GMEDC will be encouraging collaboration among Upper Valley organizations “to work together toward broader community development.”

For many of its 41 years in business, music instrument store Blue Mountain Guitar has been like a rolling stone.

First opening in 1980 as an acoustic guitar store in the basement of Lebanon Pet & Aquarium Center, Blue Mountain Guitar relocated to the row of stores in LaValley’s Colonial Plaza, then moved across the parking lot into the space formerly occupied by Costumania before closing in 2016 to become an online-only store.

But a year later Blue Mountain Guitar opened a small retail shop across the road from Colby-Sawyer in New London and then, in 2019, returned to West Lebanon with a store in Glen Road Plaza.

Now Blue Mountain Guitar has moved again into what is its fifth location in West Lebanon: the space formerly occupied by lighting store Illuminations, which has been vacant since the store closed in 2018.

“We’re doing this so we can do all our shipping out of one location,” said Barb McKelvy, owner of Blue Mountain Guitar. The business, which had been shipping to online customers out of both its New London and West Lebanon stores, will now consolidate all warehousing and shipping out of West Lebanon, where the new store has twice the space as the former one, McKelvy said.

Blue Mountain Guitar also entered a new market the past year that is doing surprisingly well (or perhaps not so surprisingly): video and audio equipment for online Zoom video calls, McKelvy reports. (It’s even possible, in case you want to stream your own basement weather report over the internet, to get a green screen at Blue Mountain Guitar.)

“There’s been a real demand for Zoom equipment,” she says.