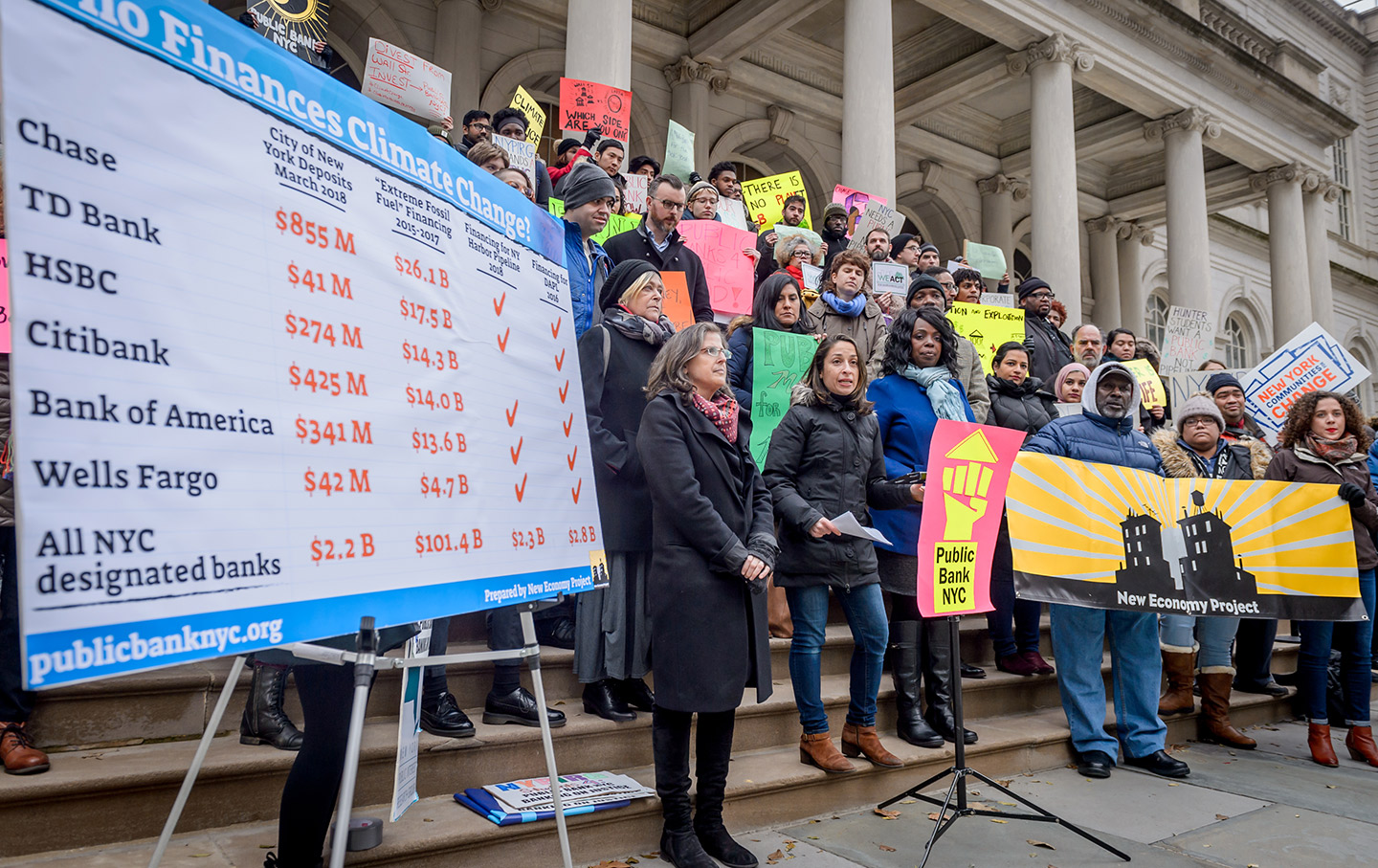 New Yorkers rallied at City Hall in 2018 to call on NYC to divest from banks that fuel climate change and to establish a municipal public bank to fund the transition to a just, sustainable economy. (Erik McGregor / LightRocket via Getty Images)

Thank you for signing up for The Nation’s weekly newsletter.

Thank you for signing up. For more from The Nation, check out our latest issue.

The Nation is reader supported: Chip in $10 or more to help us continue to write about the issues that matter.

Did you know you can support The Nation by drinking wine?

Even as the pandemic devastated New York City, megabanks like JPMorgan Chase and Bank of America continued to do a roaring trade. And now those financial behemoths are set to manage the funds that New York City and other municipalities will be deploying for the recovery. But financial justice advocates want to see the City move its money from the Wall Street titans to a public bank, owned and operated by the people.

A municipally chartered public bank would enable the city government to place its deposits into an institution that is not beholden to a commercial banking sector notorious for fueling the Great Recession, saddling working-class communities of color with toxic debt, and imposing predatory and discriminatory lending on the most vulnerable households. Advocates say the bank would operate as a public utility and invest in public interest projects, from renewable energy infrastructure to affordable housing—and no taxpayer dollars would feed into the financial corporations exploiting communities.

Linda Levy, executive consultant of the Lower East Side People’s Federal Credit Union, one of dozens of members of the Public Bank NYC campaign, told me a public bank could help support credit unions like hers and democratize the development process. Organizations that want to seed affordable housing developments or green-energy projects could bypass the big banks that would likely see them as too small or too risky to invest in.

“The concept that we have in the public bank coalition,” she said, “is that rather than having people who are not in the community, who don’t really know what’s needed, making the decisions about these kinds of loans and investments…the credit union would actually be one of the organizations or institutions that would sort of figure out, ‘OK, well, what would be a good affordable housing project? Where do we need that? Which part of our community could use this development? Who are the developers that we trust to really come through and provide us with the kind of projects that we want?’”

To establish independent City-run public banks in New York, advocates have been pushing the New York Public Banking Act, a state Senate bill that would allow any municipality in the state to charter a bank governed by an independent advisory board made up of community representatives appointed by elected officials. While the bill stalled in the last legislative session, the New York City Council is also considering a suite of bills that could help lay the groundwork for public banking, including legislation to make the city’s dealings with financial institutions more transparent and a resolution in support of a public bank that “would ensure that tax revenues will stay in the possession of the taxpaying public.”

Although a public bank would not be dealing directly with individual consumers, it would act as a partner for community development finance institutions (CDFIs), particularly federal credit unions, and help them expand their reach in local communities. The median assets under management for a US credit union is $35 million, less than one-sixth of the median bank’s assets. Support from a public bank could give them, and their borrowers, more financial leverage.

A public bank would give a city an alternative to giant mainstream banks in two ways: First, it would serve as the designated bank to hold municipal funds. (New York City currently deposits hundreds of millions of dollars in major banks like Bank of America and Citibank). Second, it would partner with CDFIs to increase their capacity to lend capital and serve local account holders—giving more businesses, organizations, and residents a financial home outside of Wall Street.

In Rochester, New York, Melissa Marquez, chief executive officer of the Genesee Co-op Federal Credit Union, said a public bank chartered by the City could partner with them on lending, which would raise the risk level the credit union was able to take on and enable them to make larger loans for ventures such as affordable housing projects. Although large banks are in theory obligated to reinvest in low- and moderate-income communities under federal law, Marquez told me that she discovered a few years ago that her humble credit union had provided more mortgages in the city of Rochester than JPMorgan Chase: “What that told me was we don’t have the level of investment lending in our city that we need. And that led me to learn about other mechanisms for creating greater scale for investment and lending…. To get the level of investment needed from the private sector…from publicly chartered banks, is something that we’ve been waiting a long time to happen.”

Though this model of a municipally chartered bank would not handle retail banking services, it could help address the epidemic of “unbanked” and “underbanked” communities. By bolstering the capacity of CDFIs, public banking would enhance alternatives to mainstream banks. According to New York City’s Department of Consumer and Worker Protection, in 2019, about one in 11 New Yorkers have no bank account. And in 2017, more than one in five residents had an account but also used “alternative financial products,” such as payday loans, which leave them vulnerable to debt traps and predatory lending. Across New York state, roughly a quarter of people without a high school diploma lack a bank account, and Black and Latinx residents are more than twice as likely as the general population to be unbanked.

Even fully banked New Yorkers are getting hurt by big banks. The financial justice group New Economy Project, which coordinates the Public Bank NYC campaign, points out that since the onset of the pandemic in March 2020, private banks, including several of the city’s designated banks like JPMorgan Chase and Bank of America, have slapped New Yorkers statewide with about $1.65 billion in ATM, overdraft, and maintenance fees. A public bank would allow the municipality to disinvest from these institutions that have also financed industries linked to private prisons, fossil fuel development, and predatory landlords.

In contrast, community-based lending institutions financed by the public bank could support small businesses. Many enterprises that were damaged by the pandemic—corner stores, food carts, or day care centers—have little capital and were less attractive to mainstream banks that prefer “high growth” investments even before the pandemic. Now, the financial landscape is even rockier for small businesses in vulnerable communities. A New York Times investigation found that in many cases, businesses owned by people of color faced disproportionately high bureaucratic and financial barriers when applying for federal Paycheck Protection Program loans, which helped defray labor and operating costs for businesses damaged by the pandemic.

The Carroll Gardens Association, a Brooklyn-based community development organization that has helped launch women-led cooperatives for cleaning jobs and child care, sees a public bank as a way to build grassroots enterprises. Gale Johnson, a worker-owner of the child care co-op, said big banks are generally unwilling to lend to small ventures like hers because of their limited capital and nontraditional structure—with multiple owners holding equal shares. But if public banks were backing community-based lending institutions, she said, “they are going to listen to community groups, community-centered businesses like co-ops…to reinvest the public dollars back into the economy.”

Some housing-development nonprofits have been exploring how a public bank could help catalyze investment in community land trusts, organizations that acquire land that’s held in trust by a nonprofit board of community stakeholders, which can help stave off real-estate speculation.

Memo Salazar, cochair of the Western Queens Community Land Trust, which has been working since 2019 to develop affordable residential and commercial spaces, told me that the need for affordable housing in will intensify as many residents face post-pandemic eviction and displacement. With state and federal eviction protections set to expire in the coming weeks, he said, “we’re really hoping we can work with the city to help as many people as possible keep their buildings, or at the very least convert them into [community land trust] properties that they can stay in…. And so a public bank would be a very helpful ally in trying to keep people from becoming homeless.”

Though the public banking concept has not been implemented at the municipal level, advocates can look toward many existing examples of public banking at work in the United States and abroad. The Bank of North Dakota, founded in 1919, is the designated bank for all state funds and engages in myriad lending activities. For instance, it recently launched several small-business loan and grant programs for federal relief funds that, according to its 2020 Annual Report, resulted in North Dakota’s getting “more funds per capita than any other state.” The Native American Bank was established in 2001 to serve a network of Native American tribes and Alaska Native Corporations and to address the lack of equitable access to capital that has hampered community development in Indian Country. Internationally, public banking systems have flourished in Germany, Canada, and Ireland.

Between 2011 and 2017, there have been more than 100 public banking–related bills introduced in state legislatures, according to a 2019 report by the Northeast-Midwest Institute. In 2019, California lawmakers passed a bill that would enable municipalities to establish public banks, with a focus on infrastructure and supporting community-based financial institutions. San Francisco passed an ordinance earlier this year to set up a Reinvestment Working Group to draft plans for a public bank.

Last October, Representatives Rashida Tlaib and Alexandria Ocasio-Cortez introduced the Public Banking Act in the House to facilitate the creation of tribal or state-based public lending banks and federal funding for the development and capitalization of public banks. In announcing the bill’s introduction, Tlaib stated that a federally supported public bank would “provide a better option for those grappling with the costs of simply trying to participate in an economy they have every right to—but has been rigged against them,” and that for state and local governments hobbled by the pandemic, “public banks could offer a much more tenable option for dealing with their debts at a time when they need it most.”

Walt McCree, a senior adviser to the Public Banking Institute and president of the consultancy Public Banking Associates, said the public is increasingly aware that “if we don’t try and control some of our money, we’re not going to be able to implement the policies that we want to [effect] change.” Under the conventional business model, he added, “the Golden Capitalist Rule pertains: Whoever has the gold, makes the rules.”