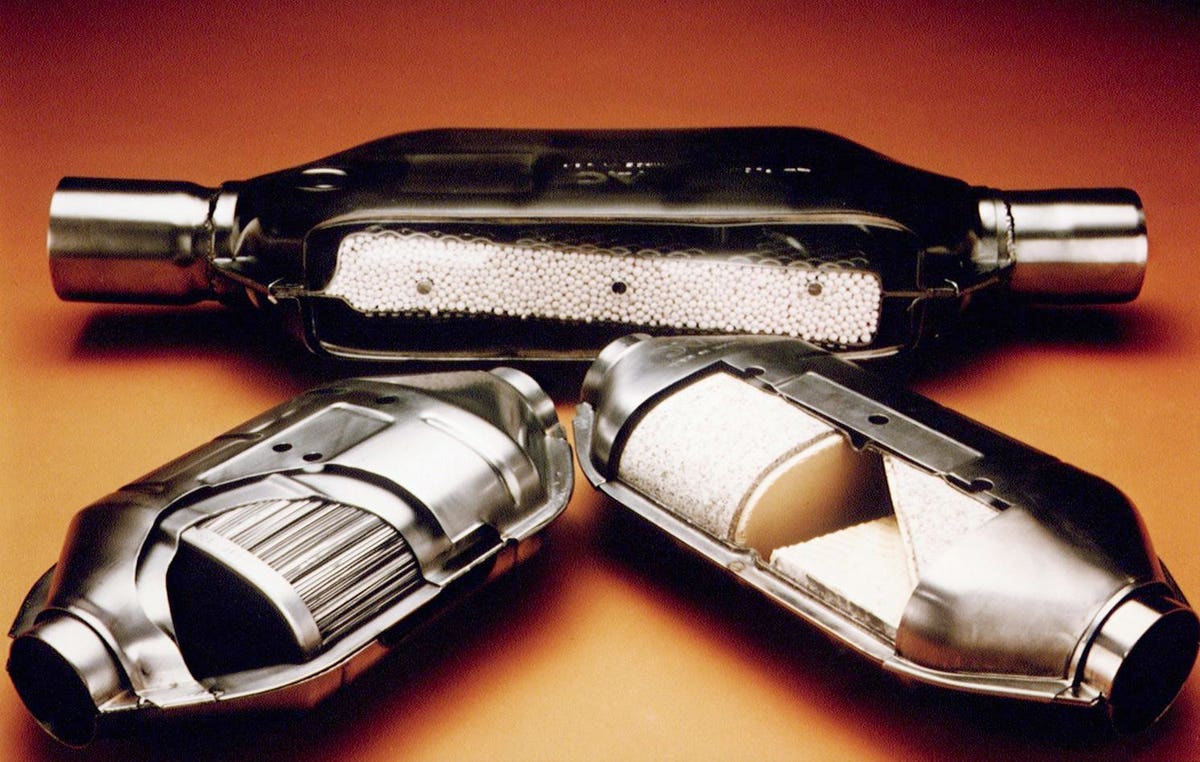 The numbers of catalytic converters being torn from vehicles continues to rise, with theft numbers skyrocketing over the past several years, according to insurance companies, police agencies and car service centers.

The devices are used to catalyze, or chemically convert harmful exhaust gases such as hydrocarbons, carbon monoxide and nitrous oxide from a car’s gas engine. Heat in the exhaust flow activates the process. Thieves target the emissions devices for the small amounts of precious metals inside, which typically include platinum, palladium and rhodium. The thieves often take stolen converters and sell them to metal recyclers, sometimes netting over $1,000 in cash depending on the converter. The metal recycler can then break the devices down and harvest the rare materials and sell them for a profit.

Some cars and trucks use several converters; electric vehicles, as you might expect, don’t use them, while hybrids still do – and the converters on some Toyota Prius hybrids are highly sought after due to the higher amount of precious metals used in the eco-conscious vehicles, according to police statistics nationwide.

Thieves have been caught on surveillance cameras stealing the devices in just a few minutes and when caught, fights and gunfire have sometimes ensued.

Once removed by a thief, who often uses a portable rotary saw to cut through the exhaust plumbing, a car will often still run (usually poorly with numerous engine lights and warnings activated) but will emit a loud, telltale exhaust roar. Replacing the device or devices, which have no moving parts, can cost thousands of dollars. Thieves typically damage the car’s overall exhaust system more extensively by cutting the converter out rather than unbolting it, which increases the cost of the repair. A Prius owner across the street from this author had to replace the catalytic converter on her Prius to the tune of $3,500, which her insurance covered less the deductible, which was $1,000. A few months later, it was stolen again.

According to the National Insurance Crime Bureau, there were there were just 1,298 thefts reported in 2018. But by 2020, the number had skyrocketed to 14,433 cases. NICB officials think the 2021 numbers will again show a large increase in thefts. The wave of catalytic converter thefts has resulted in financial losses for consumers, insurance companies and long waits at vehicle service centers, which are already hard hit by parts shortage for other repairs.

Further complicating the issue is the recent dramatic rise in cost of the precious metals inside the devices, making them even more of a target. Most people are aware that platinum is nearly as expensive as gold at over $900 an ounce, but that figure pales in comparison to the price of palladium at over $2,000 an ounce and rhodium at an astronomical $16,000 an ounce. Most catalytic converters use every small amounts of each, but some vehicles, including some popular pickup trucks, can have four converters in the exhaust system.

The thefts have resulted in a small cottage industry of products designed to make it harder to steal the devices, including welding metal cages or shields around them at a cost of several hundred dollars. Other anti-theft tips include engraving your car’s VIN number on the device and also painting it a bright color with heat-resistant paint, which the thieves will have to remove before selling the device.

The problem has also gotten legislators attention, with U.S. Rep. Jim Baird, R-Ind., introduced the Preventing Auto Recycling Thefts (PART) Act this past January. The bill would that automakers stamp vehicle VINs onto the catalytic converters in new vehicles, start better record keeping of the devices, limit cash payouts and strengthen penalties for those convicted of stealing the devices. So far, the bill has not passed into law.