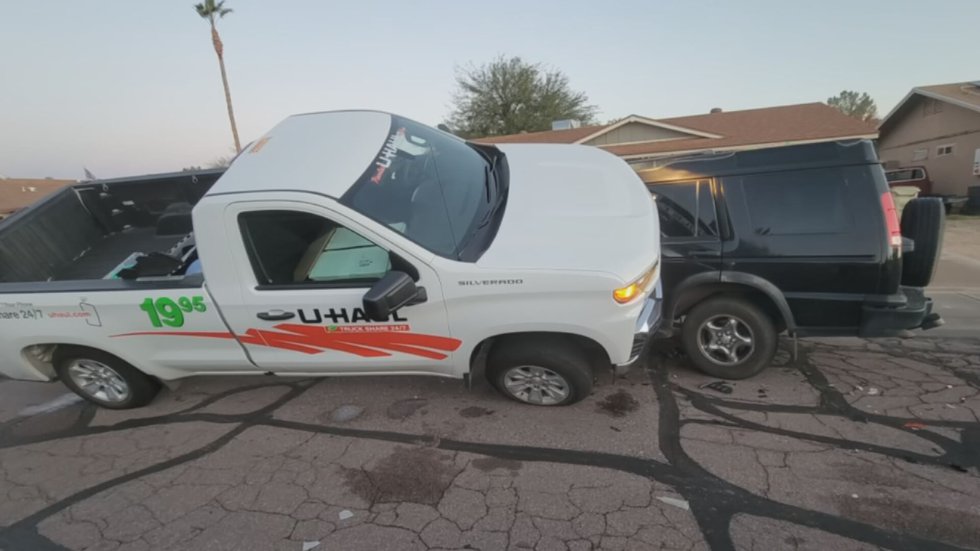 GLENDALE, Ariz. (Arizona’s Family/Gray News) – An Arizona man has been dealing with a damaged car for several months after a collision where he wasn’t even driving, and an insurance company will not be covering the damages.

“When someone says there’s a U-Haul on top of your car, how do you process that?” Arizona’s Family reporter Gary Harper asked. “Well, I just came out to see it for myself,” Schilling responded.

Schilling said before the crash, his vehicle was great to drive.

“It was a super smooth and quiet ride,” he said. But not anymore, with pictures showing his Land Rover demolished by a rented U-Haul.

The U-Haul driver reportedly fled from the scene, and since Schilling said he only had liability insurance, he filed a claim with U-Haul – believing the company would cover his totaled SUV. After all, he wasn’t driving.

Investigators from U-Haul’s insurance company eventually inspected Schilling’s damaged vehicle and said they’d get back to him. But that was three months ago, and he said his claim kept getting delayed by adjusters.

“One month later, I get an email that says, ‘Hey, do you have a copy of the police report?’ And we’re like, we already gave it to you along with all the other information,” Schilling said.

Frustrated, Schilling contacted Arizona’s Family for some help this week.

“We’re at a loss. We don’t know what to do. My wife’s grandparents have been saying to call from day one,” Schilling said.

U-Haul responded to Arizona Family’s inquiry on the delay in settling. The company responded that Schilling’s damaged Land Rover won’t be covered under its Liability Protection Plan because protection does not apply to intentional torts or criminal acts.

A U-Haul spokesman wrote in an email that the rental equipment was being used to commit a crime. Homes were burglarized in the neighborhood, stolen property was found inside the truck, and the lessee was identified leaving the scene.

Joshua Stine, 38, was later identified as the man driving the U-Haul, and police records date back 20 years with him involved in other incidents.

Schilling said he will try to purchase a new vehicle and is currently borrowing a car to get around.

“We’re just relying on friends for commuting and going to the grocery store and stuff,” he said.

There is a risk when car owners only have liability insurance instead of full coverage, according to insurance representatives. Insurance premiums are normally slightly lower, but there are risks in situations like this.